Ever-surprising Africa is famous for its Safari “Big 5”, storybook animals that include the African Elephant, Cape buffalo, Lion, Leopard and Rhino. Little did I know I was about to meet 2 of them, at the same time, on my bicycle.

After saying farewell to the team at Fahari Zanzibar, I returned to a wet and dreary Dar es Salaam before cycling towards the Uluguru Mountains in Morogoro. Veronica and I had parted there just a month earlier after completing our cycle together through Central Tanzania. 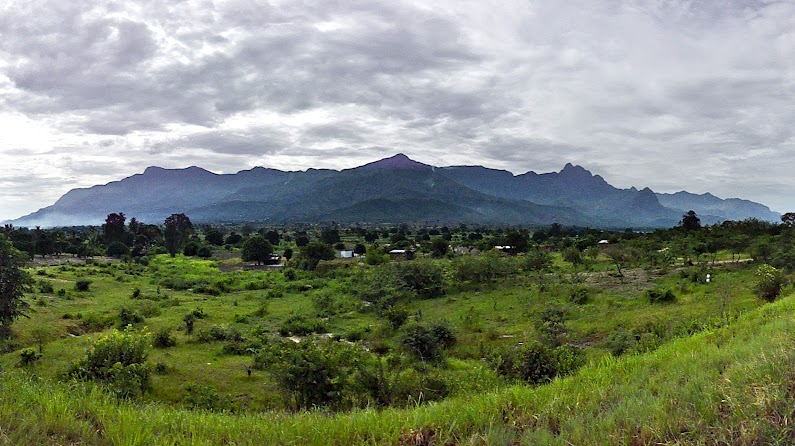 On reflection, Morogoro was my favourite city in Tanzania. It has a peaceful, friendly and fresh-air feel to the place whilst coming complete with everything a traveller would need. There’s a bustling market area and fantastic restaurant (the New Acropol) in which you could easily loose many an hour. I certainly did. 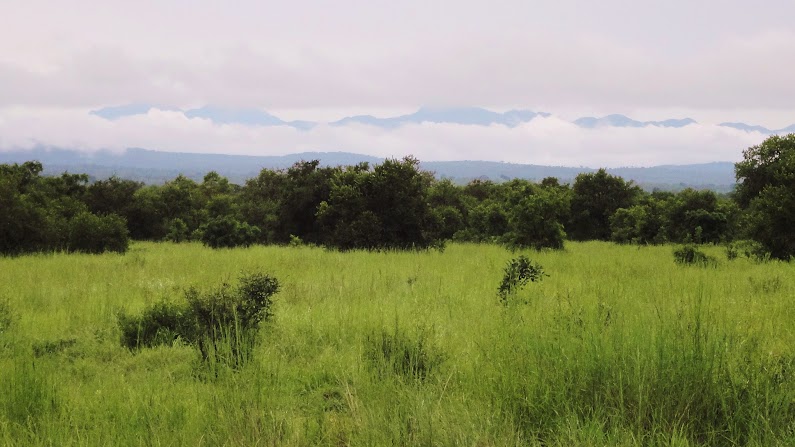 After leaving Morogoro, I noted on my map that I was going to pass through a National Park, Mikumi National Park. I’ve crossed and skirted many National Parks so far on my trip, but this cycle was going to be altogether very different. I approached the fringe of the park still in the mind-set that it was just going to be a “normal” days’ cycle. Then I saw this: 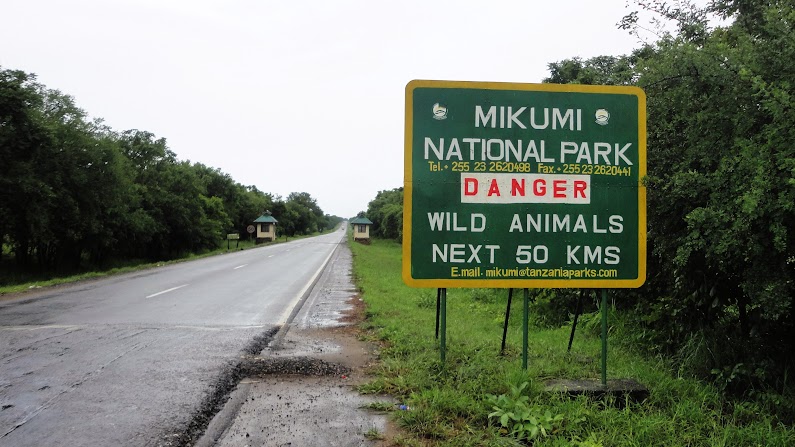 It didn’t say anything about bicycles, nor were the gates manned. I was sure I hadn’t taken a wrong turning, so I proceeded. It was a wet day, a bit grim if I’m honest, but the road was quiet. As I ventured deeper the wildlife started to appear from varying directions – baboons & monkeys flanked the roads and antelope nervously peeked through the grasses as I cautiously wound my way through.

In the distance a herd of Wildebeest grazed quietly whilst ever-curious giraffe poked through the trees. Then I noticed the unmistakable view of White Tusks. I had last seen Elephant in Queen Elizabeth National Park, Uganda, but this time there wasn’t just one, or two; there was an entire herd. As I glanced to the other side of the road, there in the bushes, another herd rubbed shoulders with Giraffe competing for that all-important slice of greenery. 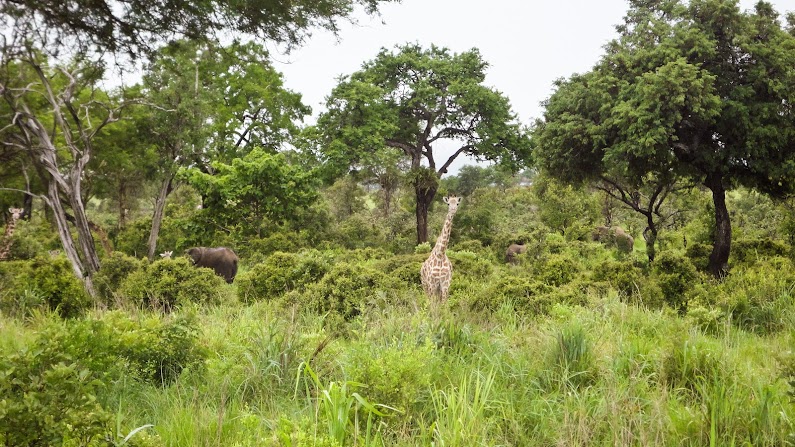 Ahh. Whilst cars trickled past, I was pretty much alone in an African expanse with eyeballs, tusks and necks appearing all around. In places the grass under trees had been flattened as if by giant bouncing balls. Clearly this wasn’t a playground, this was the territory where Elephants slept and took shade from the blazing sun.

A rear spoke popped, something that had been happening at an alarming frequency over the previous 500km. Normally I’d stop and make repairs, but this time I didn’t want to hang around – I kept cycling, now was not the time for my bike to fail me!

With elephants on either side, I looked into the distance and saw what I thought to be a herd of cows crossing the road, something that happens numerous times every day in Africa. I looked closer, these black cows looked pretty big…and why, if they are cows, are they in a National Park? Surely that’s not allowed? I stopped. I looked more carefully; these were not cows, they had curling horns. They were in fact Cape buffalo – Africa’s most dangerous animal.

I knew from people I had spoken to that generally, in herds Buffalo are fairly peaceful animals; rather it’s the aging elders or injured, singular Buffalo that you need to be careful of.

Still, they had spotted me; half the herd moved on to one side of the elevated road whilst the other half remained, keeping quiet and grazing on the abundant, freshly watered grasses.

I proceeded, I was nervous before but now my heart was beating pretty fast, with Elephant on either side I didn’t want to hang around. A car drove past and didn’t seem to see anything wrong with me being on a bicycle, so I kept going. I was at that moment where I could hear the blood pumping in my ears. It felt surreal, but I continued. In amazement the buffalo parted slightly away from the road as I cycled ever nearer.

Rocketed by an adrenaline rush I proceeded further. You’ll have to excuse my relative lack of photography and filming; I took a few snaps but to be honest, feeling somewhat out of my depth I was keeping my wits about me and didn’t want to be caught off guard. I did, however, capture enough for this short video:

As I continued passed the Buffalo, Giraffe – complete with their majestically time-lapse movements ran alongside the road. Monkeys gathered for AGMs whilst Wildebeest, Zebra and a flurry of antelope went about their daily routines. I was in that storybook we all remember hearing for the very first time. Right in the middle of it.

I have no idea how fast or slow I cycled, but after 50kms I made it through the exit gates into Mikumi town where I would rest for a few days, reflecting on an absolutely magical cycle. The hotel I chose came complete with a snake park, but thankfully these slithery menaces were kept isolated in tanks.

Mikumi still remains an absolutely highlight for me, a privilege to see those animals up close without paying a cent for Safari or Park fees. To have wild animals so relaxed in their natural environments that I could just peddle-on-by is an experience that cannot be put into words.

Many people have asked where I’d recommend for a Safari destination; I always say Mikumi. Whilst small (in comparison to say the Serengeti or Ngorongoro Crater), it’s teaming with wildlife, leads onto the vast Selous Game Reserve and Lions do roam in the depths. Yet with all that to offer, compared to other parks you can hire vehicles for a fraction of the price and the entrance fees are as low as they get – just $20 per day.

So two out of the “Big Five”, all within 50km and all for free from the “comfort” of my bicycle.

Next up was a cycle through Southern Tanzania, into Malawi and towards the famed Lake of Stars. To be continued…