Africa always surprises. It’s been a theme of my cycle and in Zambia, a landlocked country in Southern Africa, this hypothesis would be proven true – time, after time, after time.

My cycle from Zambia’s border would take me from the under-construction children’s village for SOS in Chipata to the “Smoke which Thunders”, Mosi-oa-Tunya, the magnificent Victoria Falls where Zambia ends and Zimbabwe begins. This post is my story of cycling through Zambia. 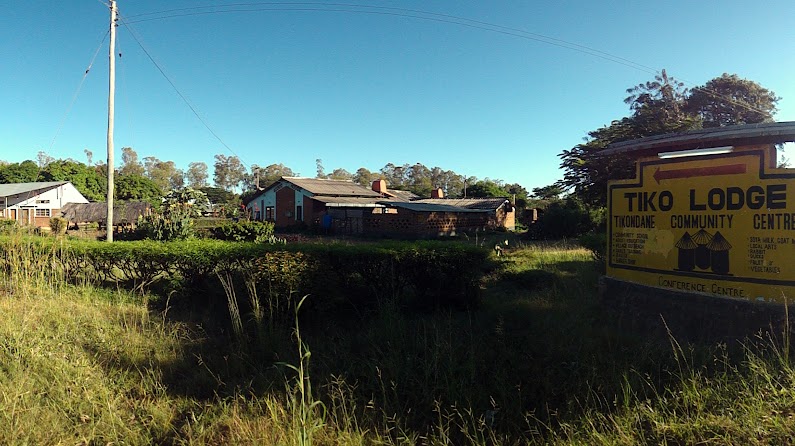 After leaving Chipata I called in at the Tikondane Community Centre, a community development project run both for, and by, the people of Kitete, the local town.

I only stayed one night having their very fair priced dormitory all to my own (20,000 Zambian Kwacha – about £2.50/$4). I enjoy staying at well-intentioned places like Tikondane, who give back to the community through the encouragement of local business and sustainability. The accommodation was very comfortably and the food excellent value.

Through the very warm, green lands and along quiet roads I proceeded through friendly Zambia. 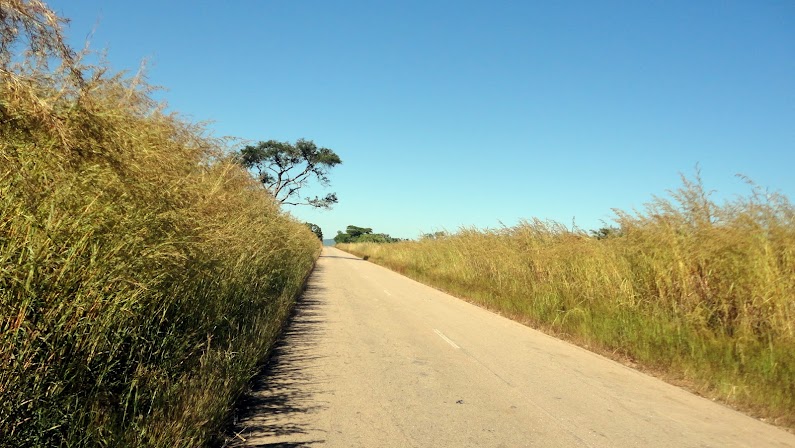 Nobody asked for money and people would often just walk up to me with the sole intention to simply greet and wish me a good day. 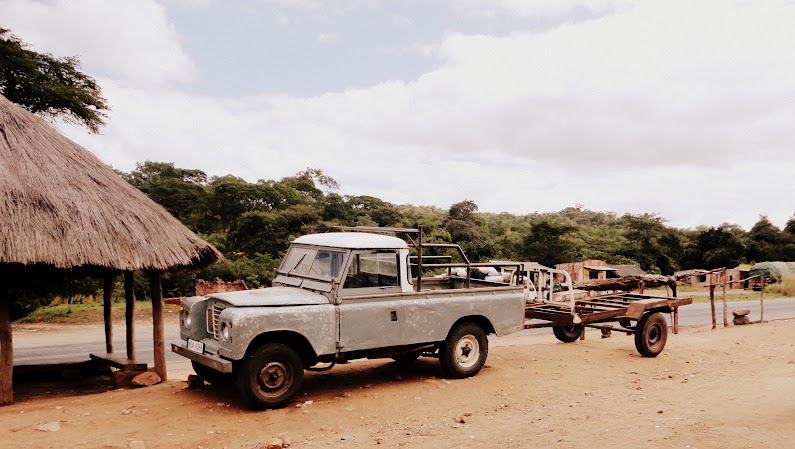 The quite, sleepy villages would come and go. Cycling through Rural Africa on a Sunday is always a pleasure and in Zambia it certainly doesn’t disappoint. Church goes are dressed in smart, brightly coloured attire and the sense of community and fellowship is strong. Music pours out from the local churches, as does the passionate voice of the preacher getting into his (or her) rhythm.

Microphones and speakers being cranked up to the max (if not beyond) are an essential accompaniment. 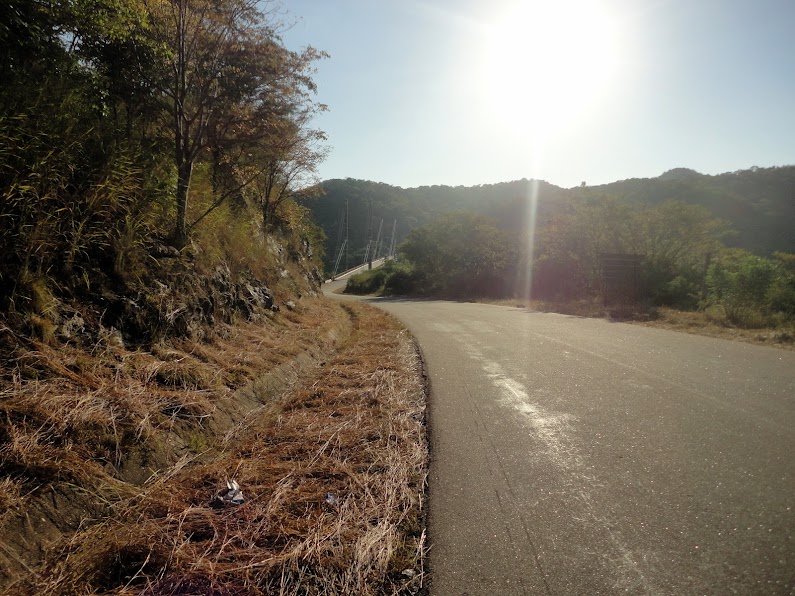 Soon Luangwa Bridge appeared through the mountains where I rested for a day at the nearby bridge camp. By my standards it was expensive, but I offset the price of wallet-heavy beer by camping under the trees. I also won’t deny tucking into one of the biggest camp breakfasts I’ve had on the ride!

The cycle became hillier during this section but the curious Zambians added smiles & waves as I meandered my way through their delightfully warm land filled up with Nshima & Veg, a very pleasing local staple. 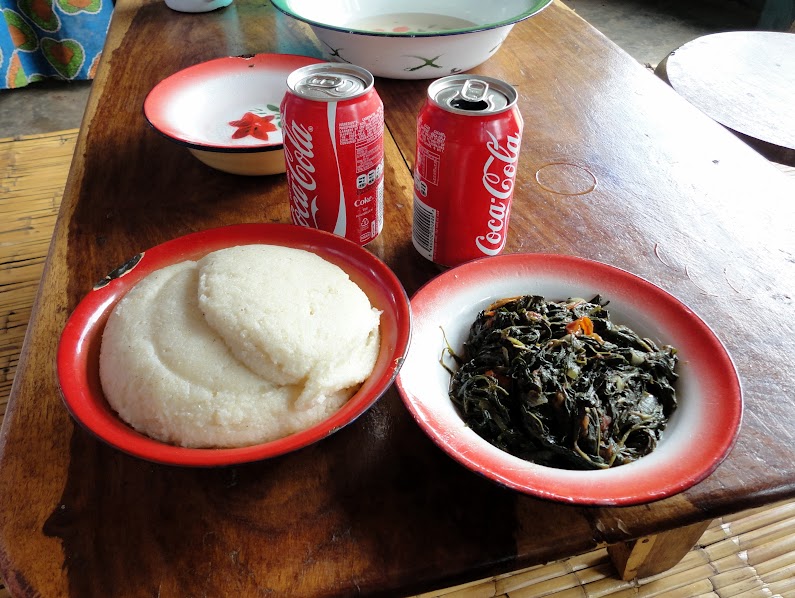 Over the horizon the cosmopolitan capital of Lusaka approached. I had imagined it to be a busy, noisy and slightly polluted African City – but it was far from that. It was green, clean and seemed much more developed than other capitals I have so far visited on the ride.

Rebecca Rogoff, a Zumba-Crazy and very supportive friend from back home put me in contact with Peter & Theola Castle, who hosted me during my time in Lusaka. They were ever so accommodating and I much enjoyed a Mosi or two (local beer) with their warm friends and family.

Peter is part of the Elephant Charge project, an event which involves taking a sturdy 4×4 and driving, as fast as you can, through the Zambian bush. The winner is actually not the fastest team; rather it’s the team which completes their navigation through the required checkpoints in the shortest distance (calculated by GPS).

I doubt I’d be up to the task on my bicycle, but it sounds like a lot of fun. Whilst a great challenge that comes complete with its own gauntlets, it’s ultimate aim is to raise money for education in Wildlife & Conservation. In 2011 their Elephant Charge raised over 425,000,000 Zambian Kwacha, which is just over £55,000 – absolutely incredible. 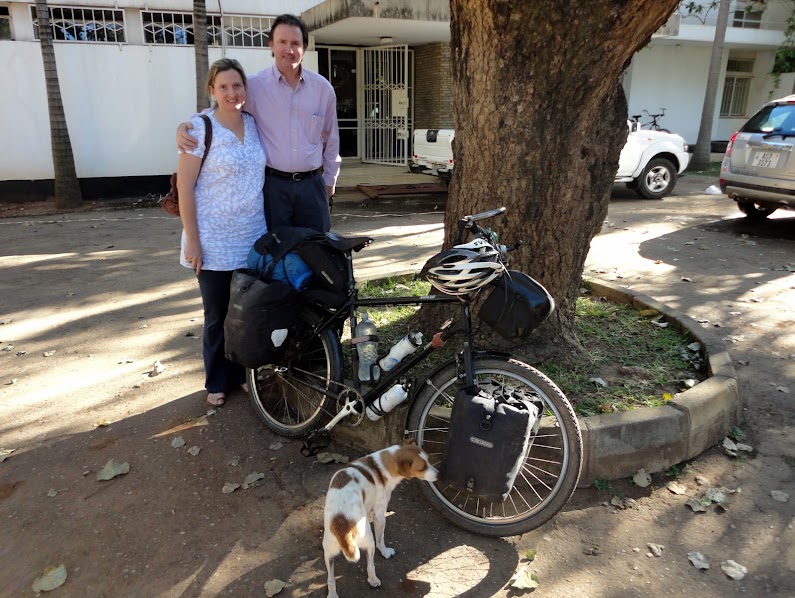 Huge thanks to Peter & Theola for their wonderful hospitality in Lusaka, I hope to see you all again soon 🙂 And good luck charging through the bush…

It was time to smell the coffee and cycle out of Lusaka. But rather than anything of bad omen, I really could smell the Coffee. Zambia’s warm hospitality was to continue as just down the road, thanks to Peter & Theola, I was to be hosted by Jesper & Theresia of Munali Coffee, a Coffee Farm within the grounds of the larger Mubuyu Farm (also run by Jesper & Co). 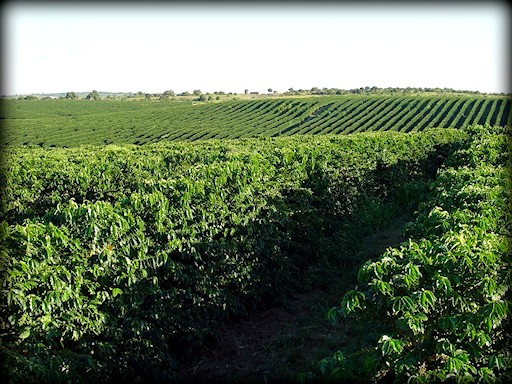 Jesper Lublinkhof, a former Commonwealth Cyclist, has his own cycling workshop which I couldn’t fail to notice as I cycled up towards the farm house. In true form to Zambian hospitality, Jesper phoned me (he was out for the day) and told me to “make myself at home” and make use of the workshop if I needed. But why such a huge cycling workshop?

Mubuyu Farm is home to a huge workforce. One day Jesper decided to setup a home grown professional cycling team; any worker who wanted to was asked to cycle in a farm race with the best being selected for a cycling team. Those chosen were awarded bicycles, all the necessary gear on top of sponsorship and support for local races and training. As a result of this admirable investment to the local community and work-force, some of the team are now participating, and succeeding, in cycling at a National (no doubt soon to be International) level.

Over dinner Jesper mentioned that he’d been trying to get farm-wide Wi-Fi working, but so far hadn’t succeeded. Like music to my ears I extended my stay a few days and worked with the farm setting up the long range Wi-Fi to connect various sites and family houses to the Internet. 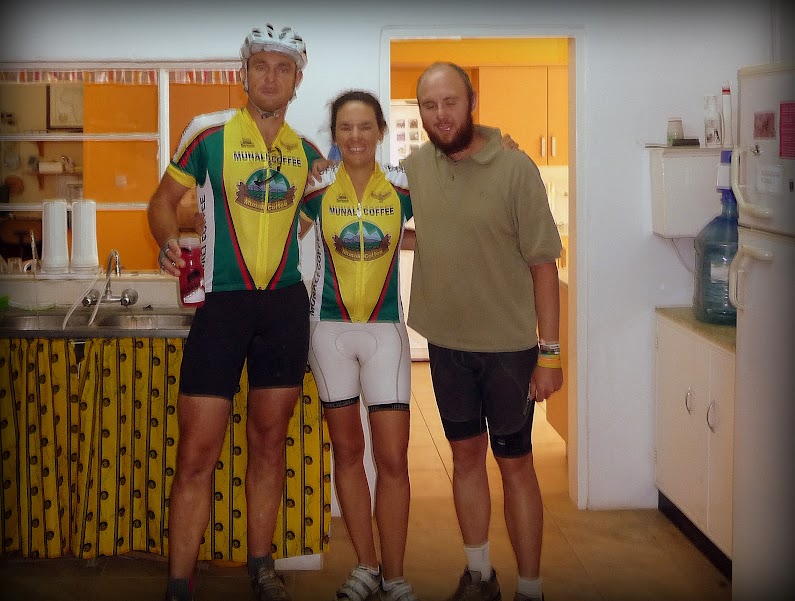 It was a wonderful opportunity for me to learn a bit more about this technology, which I had also used to connect Naivasha Children’s’ Shelter to the Internet earlier in the ride.

I was hugely grateful to Jesper, Theresia and the others at the farm whose family history could tell it’s very own Out of Africa tale. It was a thoroughly enjoyable few days and I was now proudly kitted out with my very own Munali Coffee Cycling Jersey. 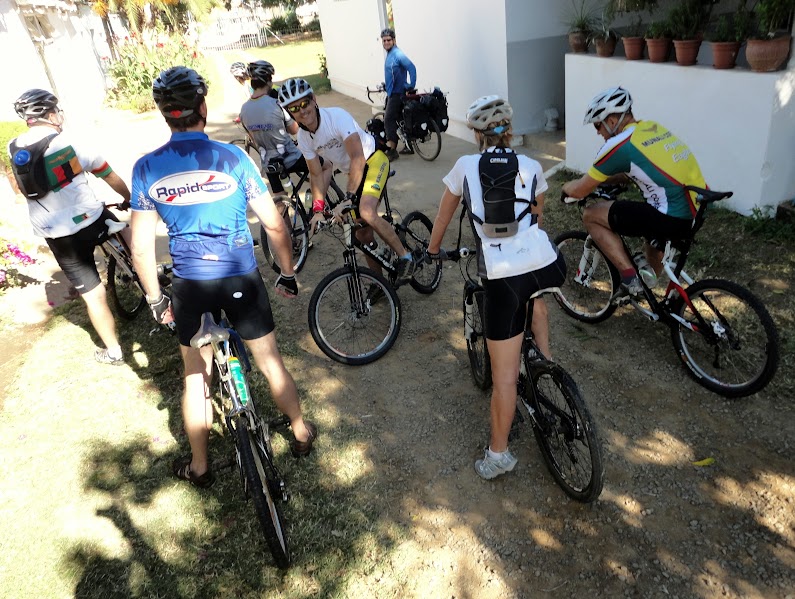 I met Shane a few days earlier in Lusaka. Upon meeting Shane, his first impression of me was “did this scruffy fat git really cycle here from Egypt?” Charming.

Actually it was great meeting Shane. We had a fun time sharing banter in Lusaka and, thanks to Jesper, he too joined us at Munali Coffee where he made himself look pretty (mission impossible) whilst I worked on the technical stuff.

The banter continued as after our days spent with Munali, we cycled out together where our first stop was to be Debonairs Pizza in Mazabuka, after just 40kms cycle. Wonderful. 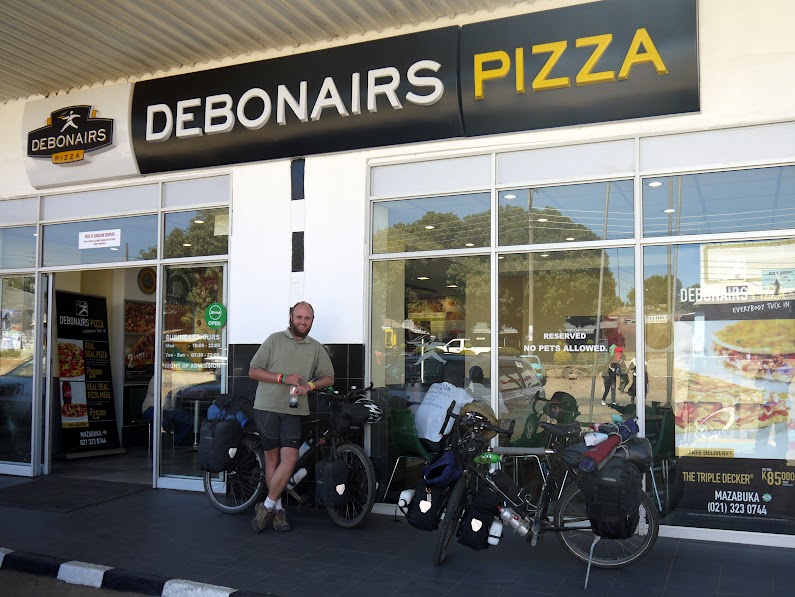 Shane, unlike me is no newbie to the Cycle Touring fraternity. He’s already cycled across America, Uganda and other worldly destinations sharing it all through his very informative Blog, Shane Cycles.

Shane went on to further describe me as an IT Geek & Nerd in his blog post on our cycle together. Naturally I have no need to retaliate. I mean why would I? Just look at him. Nice tan lines. 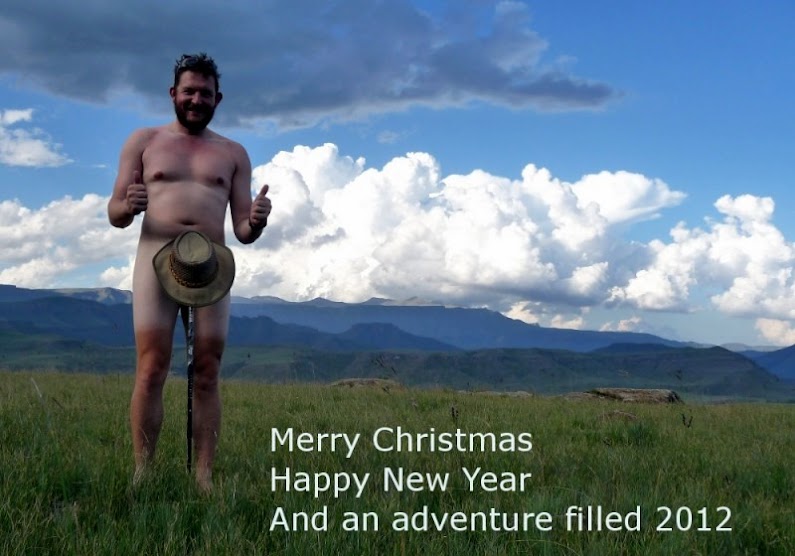 His latest expedition started in Cape Town and he’s since been meandering his way through Southern Africa. He’s not sure where he’ll end – somewhere further North hopefully, but it’s likely his route will see him cross the DRC and into West Africa. 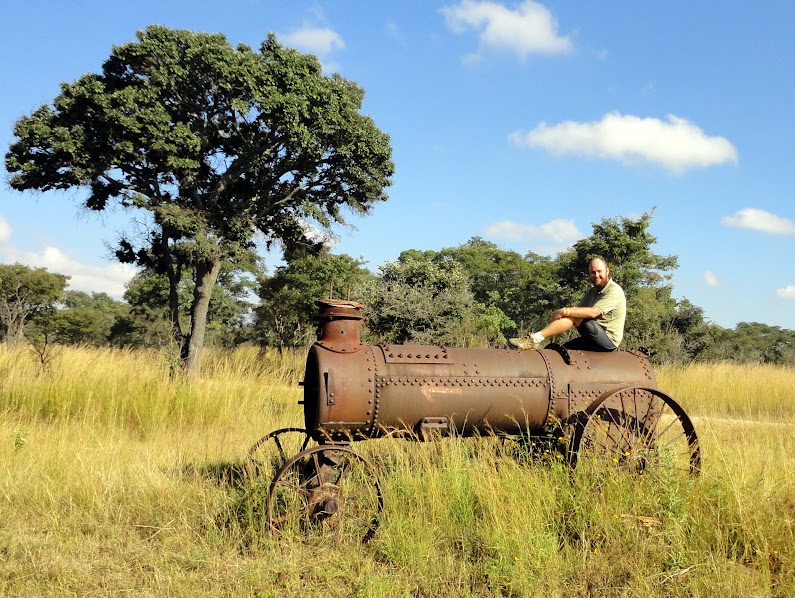 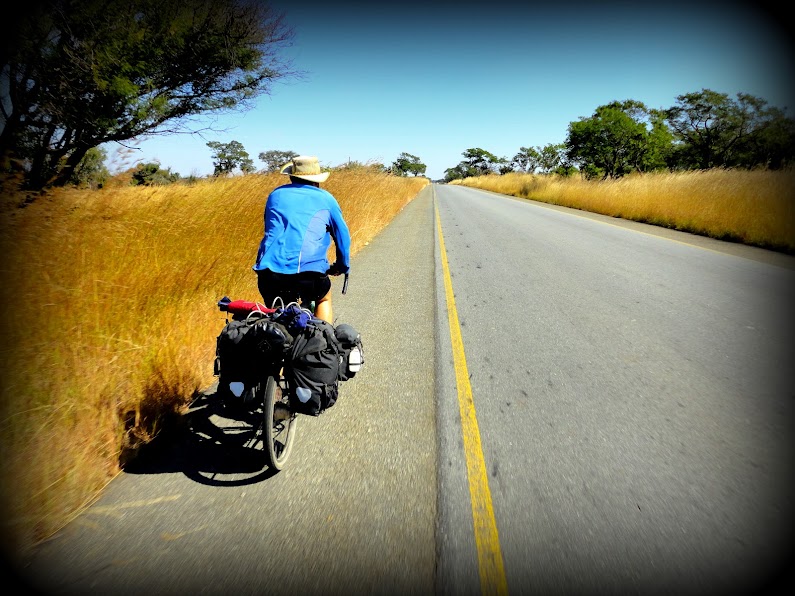 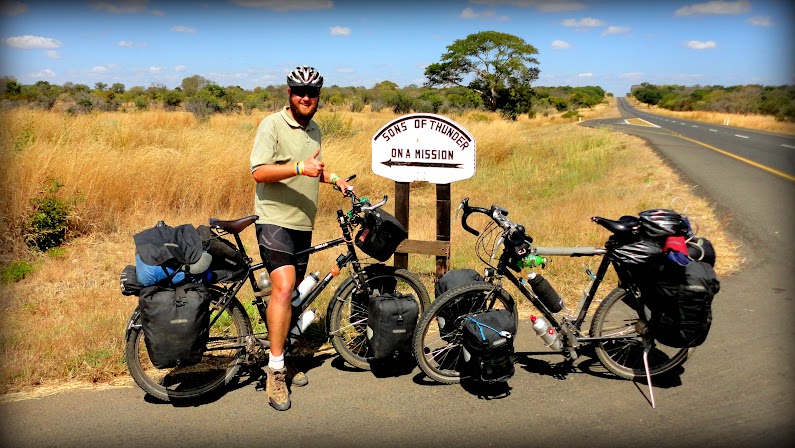 And so through flat, warm tarred roads Shane and I cycled towards Livingstone, where we camped at the very nice Zambezi Waterfront lodge. Livingstone whilst pleasing is just another town, so Shane and I decided to get closer to the Zambezi and the areas main highlight, Victoria Falls – known locally as Mosi-oa-Tunya (“Smoke which Thunders”). 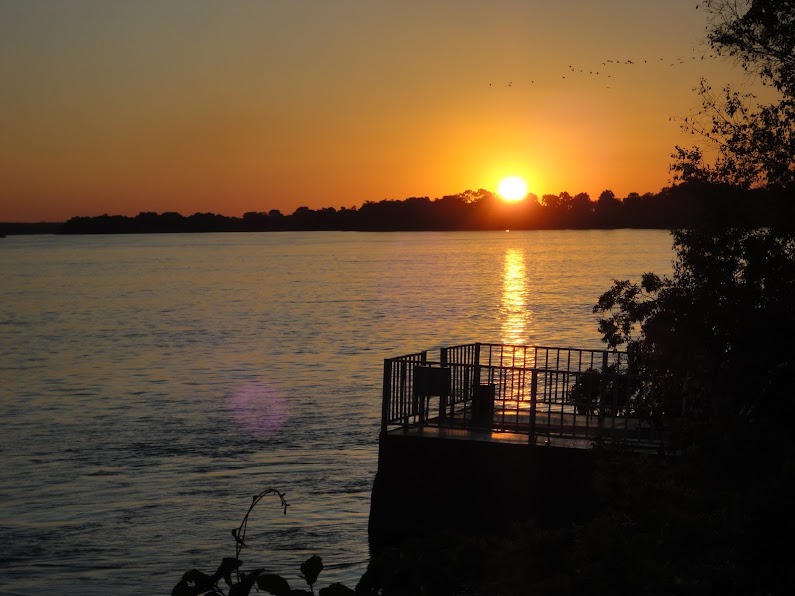 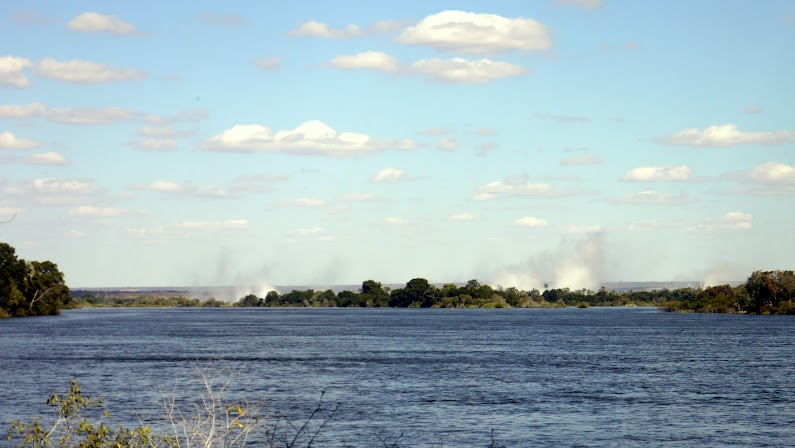 I grew another year older in Livingstone, so to mark the occasion Shane & I took to skies in a Microlight. It was absolutely incredible. $100 buys you 15 minutes in the air, but you get to see the falls from the most spectacular angle whilst feeling you’re all by yourself – free from the crowds and without anyone selling you a bracelet made from the hair of an Elephants tail. 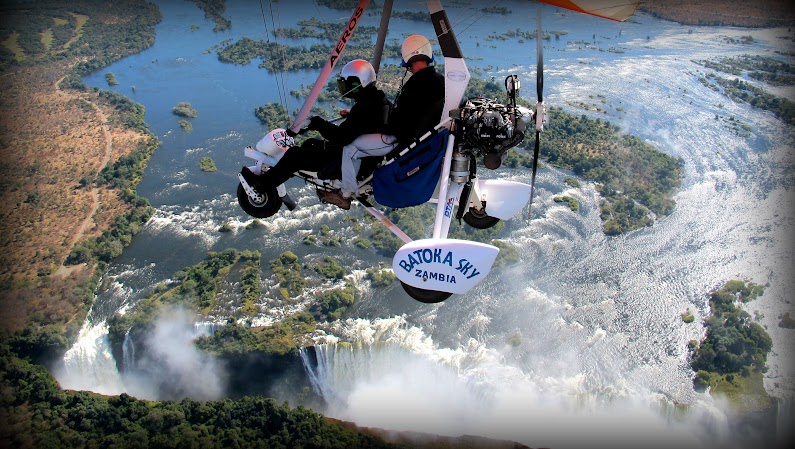 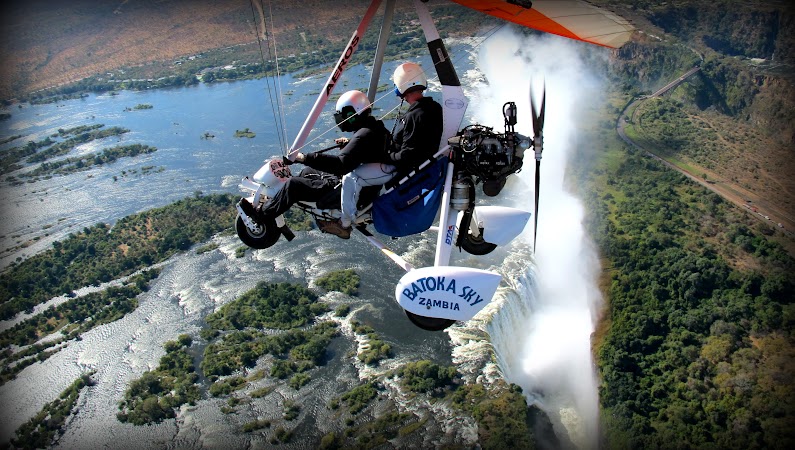 From Zambia I had planned to cycle into Namibia towards Windhoek and take advantage of the tailwinds, but following our Microlight flight I was drawn towards Zimbabwe so my route quickly changed.

After a few days camping, Shane and I packed up our gear and got back on the bike. Our destination was to be Victoria Falls Town – a choice which would mean crossing the bridge just in front of the falls. After a wonderful time in Zambia, the land of “Uncle Bob” awaited. 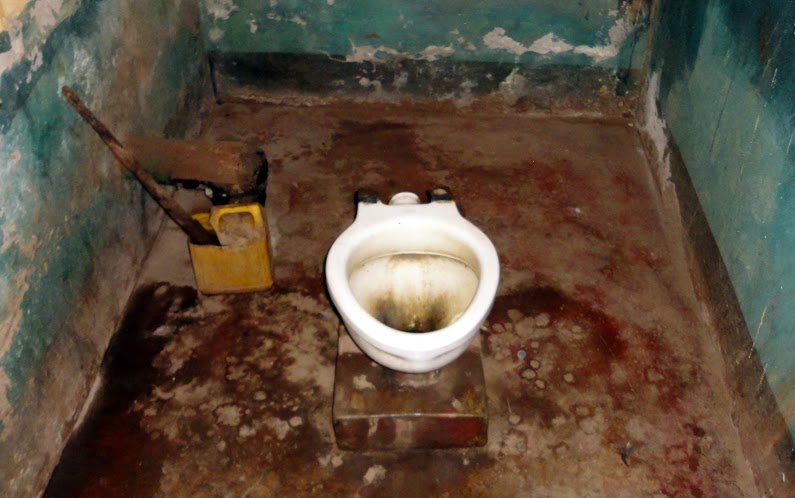 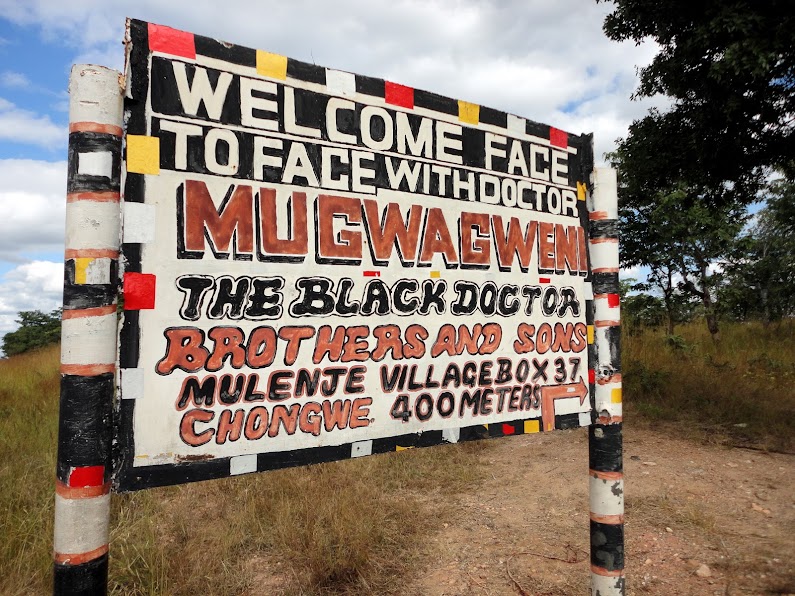