The joy of Central Tanzania

After a busy yet wonderful Christmas spent at Life Beads Kenya with Dan, Naivasha Children’s Shelter and the locals at Naivasha Sports Club, it was back to the road where I was excitedly due to join my most supportive friend from back home, Veronica Moretti.

Having cycled from Bujumbura to Naivasha a few weeks earlier, one might have thought I’d be hungry to take on Africa once again. Actually I wasn’t, though most likely I was hungry for something…most likely Pizza. But I was in luck; I had a trump card I could play over the Africa Roads.

One year earlier I cycled from Arusha to Naivasha via Mt Kenya, so in theory I didn’t need to cycle it again. Fantastic; rather than sweating for a few days, I instead jumped in a taxi, sipped a coke before falling asleep post sugar rush whilst my driver escorted me the few hundred kilometres to Tanzania.

After a few hours and dollars well spent, I made it to our hotel in Arusha where I was delighted to meet Veronica who’d already navigated the local busses from the Airport. We spent a few days enjoying the sights (and being hassled by touts) before managing to sample a morning view of Mt Kilimanjaro from the exact spot I photographed a year earlier after cycling up from Zanzibar. 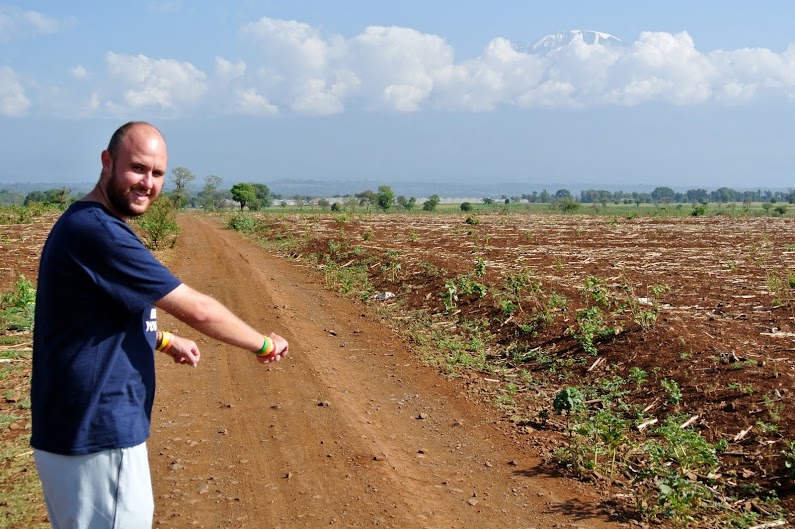 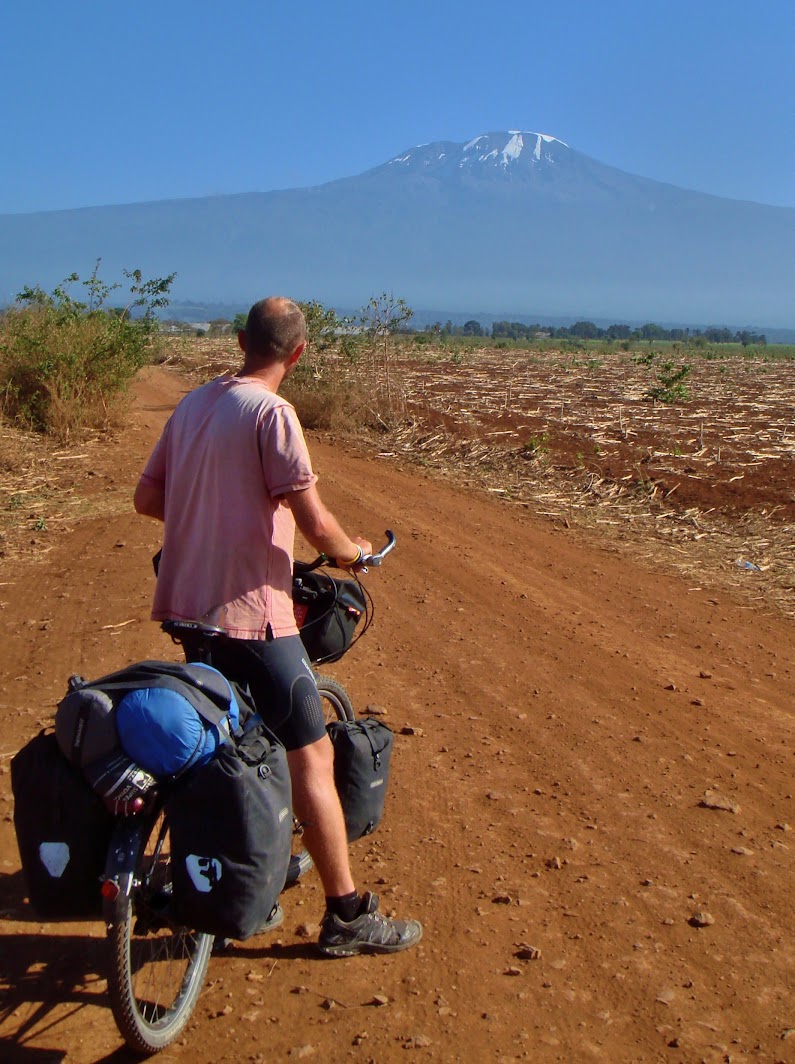 We were also lucky to meet Elvis Munis, the man behind the Chile to Kili project which aims to improve environmental awareness in the East Africa country of Tanzania. 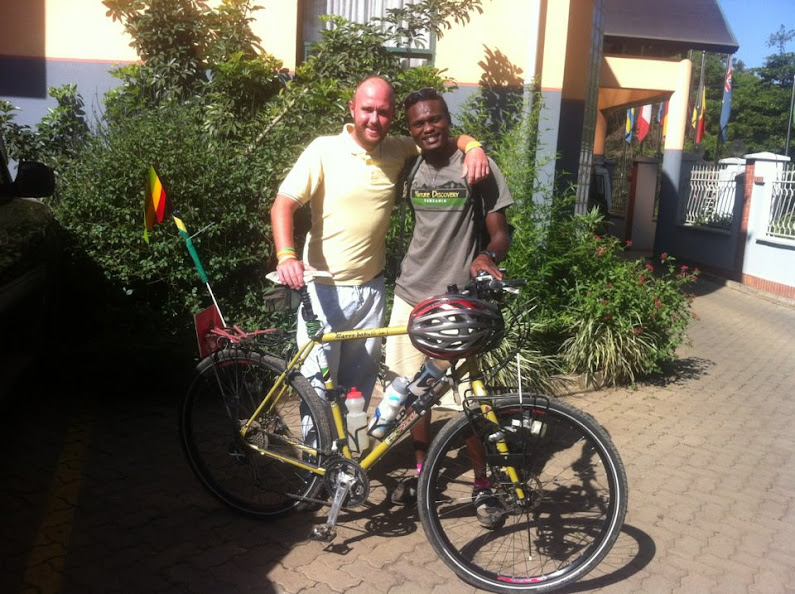 Elvis is the first long-distance black African cycle tourer (a fact he’s very proud of) and at time of writing is in Brazil en-route from Santiago in Chile back to his native land, Mt Kilimanjaro in Tanzania…an approximate distance of 80,000km heading via China, Europe & West Africa. We parted after just a few hours, but wish Elvis every success in his impressive, ambitious and hugely worth-while venture aiming to benefit the Conservation Resource Centre (CRC) in Arusha, Tanzania.

So after the New Year celebrations we hit the road; it was tarmac at first and complete with Maasai staring curiously at these two mobile Mzungu (white folk). 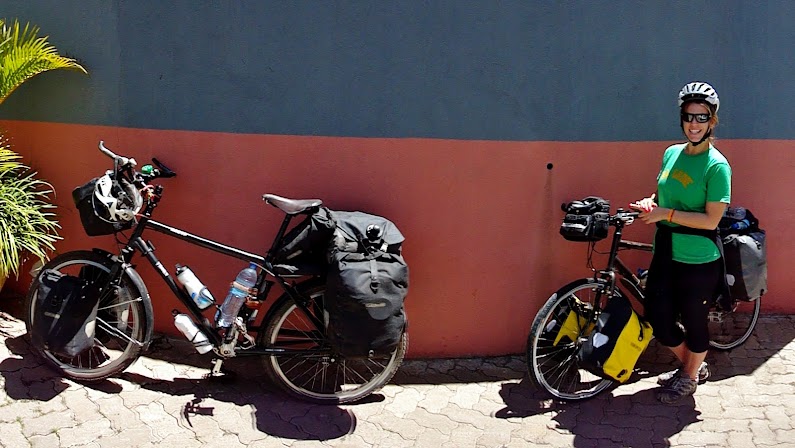 Veronica being of Italian descent is naturally fascinated by the Maasai. Just apply the faintest mention of the word and the cultural magic sets to work.

Zanzibar, the island we were headed to is very popular with Italian Tourists – in fact they make up almost 40% of all tourists who visit the island. They’re flown in by the plane load, complete with Parma Ham, Parmesan (seriously – they’re very picky eaters!) and eyeballs tantalisingly looking for the first view of a Maasai. I find it most curious; clearly there’s something in their psychology that Man vs. Lion still excites so wonderfully. 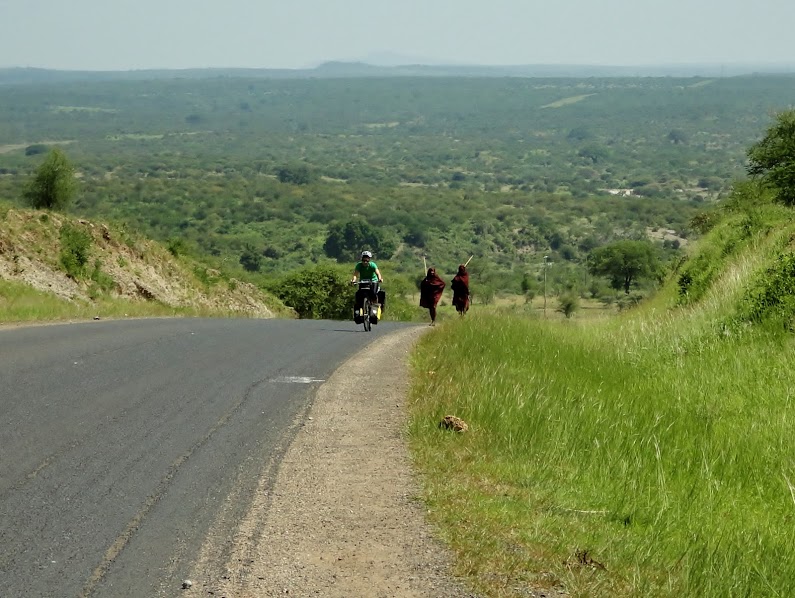 Having peeled Veronica’s eyes away from the Maasai and a stretch of welcomed tarmac, at Babati we met a flurry of Chinese Road engineers. From this point onwards it’s dirt road until you get to Tanzania’s Capital, the small city (large town / very large village) of Dodoma – the main excitement of which was a delicious Chinese restaurant. There really isn’t much else, but it was pleasant enough. 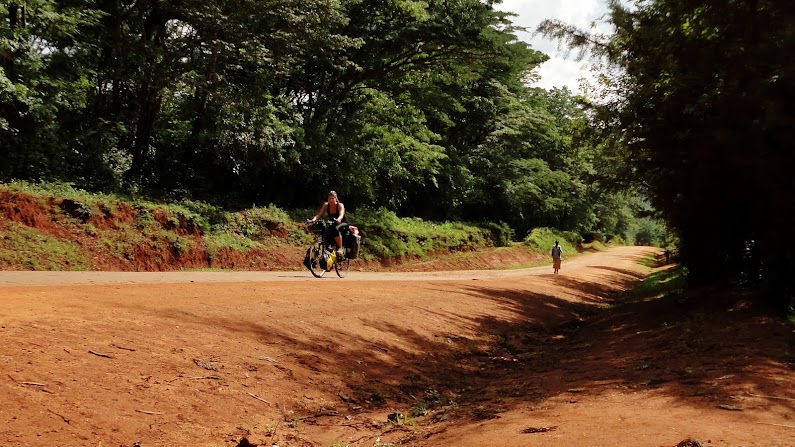 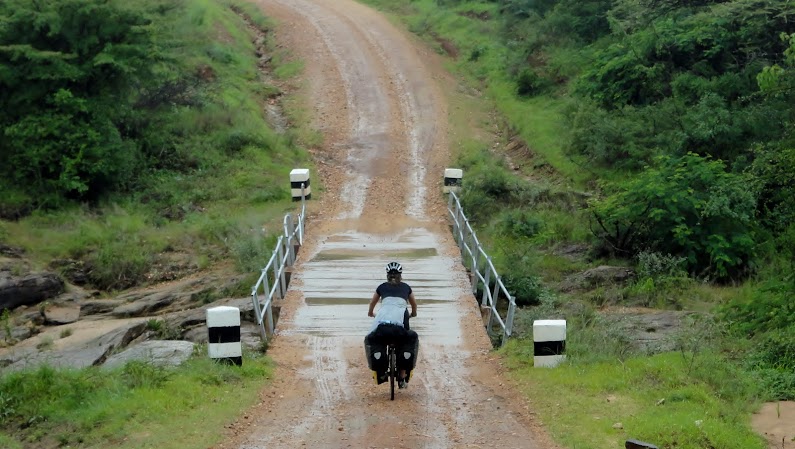 The road from Babati was hilly in places but with views & sunsets that are ever-so stereotypically African. We had a great time flowing through the sleepy villages, sandy river beds enjoying the mountain views, slow sunset cycles and smiling faces along the way. We rested a night in Kondoa, a pleasant enough place for a welcome rest. 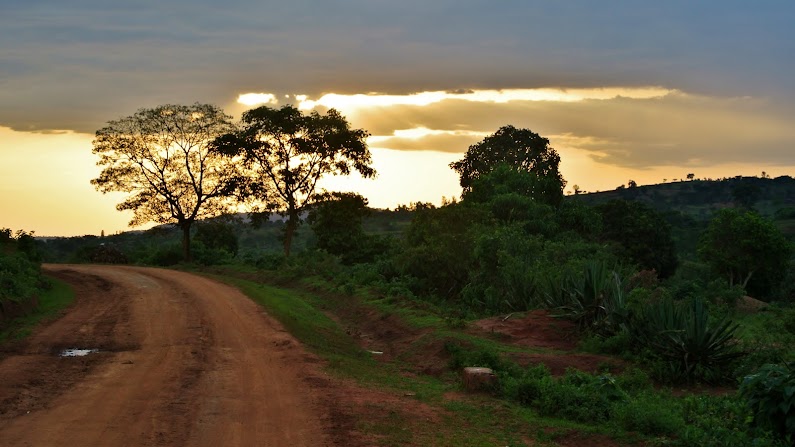 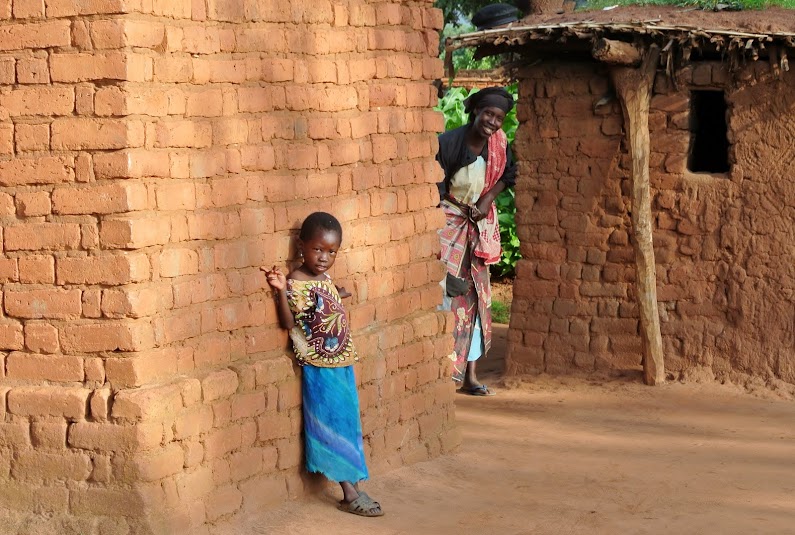 After Dodoma we lucked in on tarmac again, cycling the last 300km towards Morogoro where we checked in and celebrated the completion of Veronica’s cycle – a hard but very well fought 701km through Central Tanzania.

That night we enjoyed [at least one shandy] and a burger which Veronica in typical style described as “insania”. To be fair, it was exceedingly delicious after a diet predominantly filled with rice, beans & chip omelettes.

Veronica taxied to Dar es Salaam where she celebrated and relaxed Zanzibari style on Paradise Island with her Mum for a few days, before I caught them up again after they ferried back to the mainland after much needed pampering. 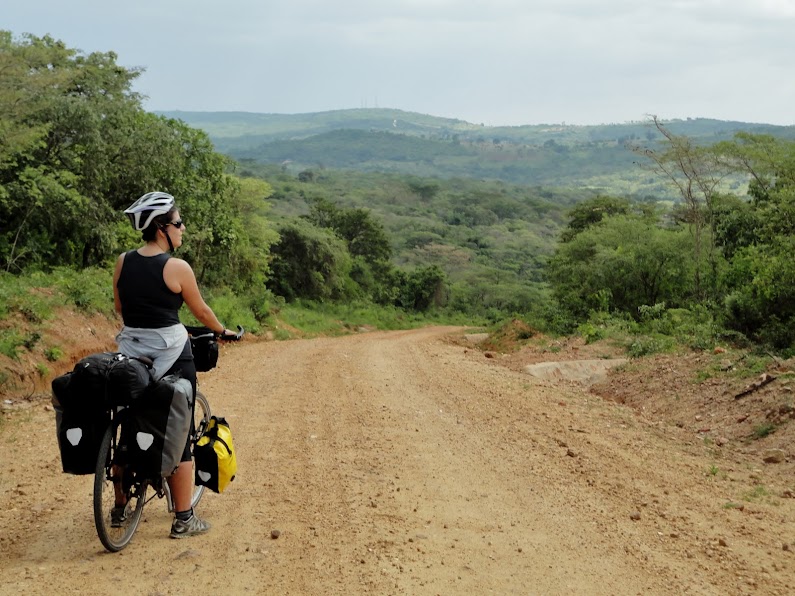 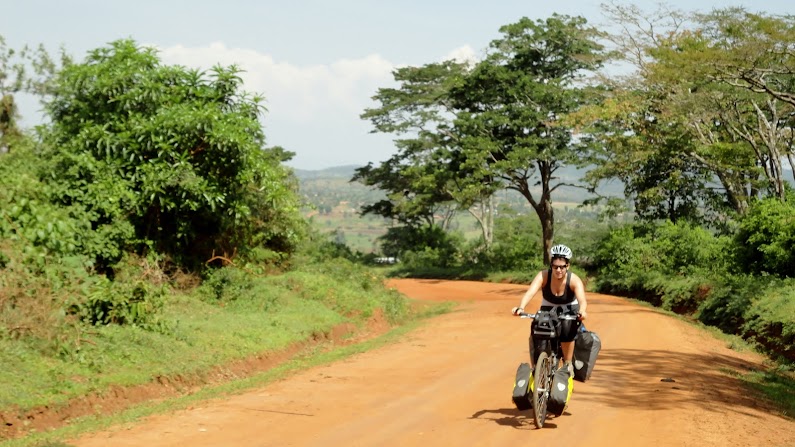 Veronica’s Mum, Luciana, very kindly treated me to a night at the Hyatt Regency in Dar es Salaam, which made me a fish out of water if ever there was one. 5* luxury, air conditioning so powerful it could freeze an Eskimo whilst the morning will greet you with a breakfast buffet even a Roman emperor couldn’t finish. Apple crumble for breakfast, in Africa? Crumbs.

To absorb the sheer ridiculousness of it all, I cracked the air conditioning up so high it made me shiver.

Naturally I needed to counteract my new climate, so I enjoyed a bath whilst relaxing in front of a TV so wide I couldn’t see the ends. No doubt it was 35 degrees outside; in fact I’m sure the curtains could be adjusted by remote control, but by this point my brain had all but melted.

The next morning I bid farewell as Veronica & Luciana made their way back to the UK. After doing my best to devour the entire buffet, I returned to my lesser sumptuous digs, Safari Inn, on the other side of town to catch up on the general admin that goes with the ride.

A turn for the worse…

Unfortunately one evening whilst walking back from a delicious curry at Rainbow Hotel, I was knocked to the ground by a car just outside my hotel and relieved of my laptop, iPod & wallet before the car sped off.

I’m not entirely sure what happened, but within a few seconds I was efficiently mugged.

Embarrassingly, on my forced trip to terra-firma I managed to wipe out a dear old man who subsequently banged his head on the ground; clearly I’m no Maasai. So the next few hours were spent in Police Stations getting things sorted and cleaned up.

There was nothing I could do; I didn’t remember the numberplate, assailants or in fact much else. The Police were helpful with what little they could do and for that I’m grateful.

It’s worth noting that Dar es Salaam (which ironically means Harbour of Peace) seems to have become a bit more sinister in recent years. The Police informed me that muggings have been on the rise and it’s definitely advisable to take a taxi after dark, particularly if you’re walking near tourist frequented places.

I was lucky, I wasn’t hurt, but I was sad to lose my trusty & reliable laptop, iPod & Wallet. Oh well, most of my data was backed up and someone somewhere now has an eclectic music collection full of audio treats.

So Dar had lost its appeal to me; there’s really not a lot to do there, rather for tourists it should simply be considered as the gateway to Zanzibar. In a fortunate twist of events, just a day earlier I had met Julie Lawrence, the lady behind the successful Women’s project Fahari Zanzibar located in Stone Town, the islands colourful and historic Capital.

They’d been having trouble with their Website and needed a little help, so with that in mind I packed my bike, bags and headed for the Ocean. A new, exciting project awaited…

Once again, huge congratulations to Veronica for completing her cycling challenge in such energetic style and fantastic, motivating company through Central Tanzania. Enormous thanks to Luciana for the air-conditioned paradise; I enjoyed every second! 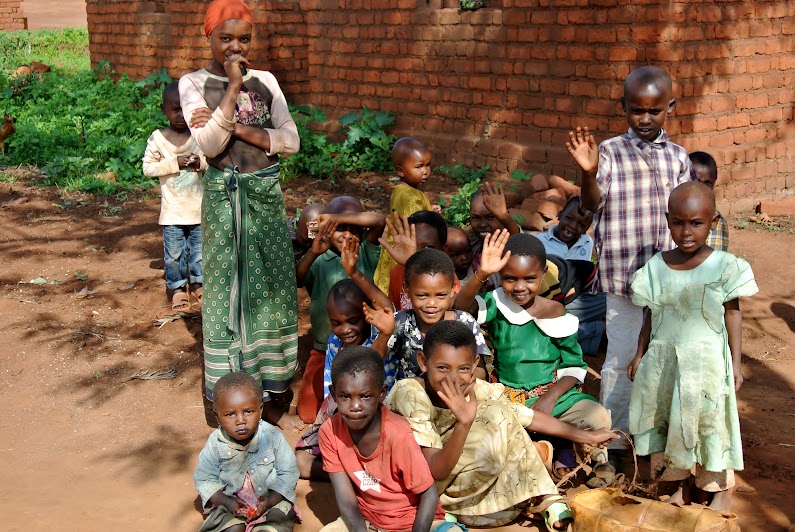