“The genocidaires did not kill a million people. They killed one, then another, then another…day after day, hour after hour, minute by minute. Every minute of the day, someone, somewhere, was being murdered, screaming for mercy.
And receiving none.” – Kigali Genocide Memorial Centre

I often wondered whether to start this blog with a quote about the Rwandan Genocide.

Perhaps Rwanda wants to shed this image and move away from it – but a trip to the Kigali Genocide Memorial Centre will tell you otherwise.

In fact it was ignorance which, in 1994, marked the brutal termination of 1…million lives, 250,000 of which are buried in mass graves at the Memorial Centre. The UN, as it will admit, catastrophically failed in its international objective and the tribal balances in Rwanda, stirred up and played upon by Colonial French & Belgian powers, brought Rwanda to the brink of death in 1994.

As Nigerian Nobel Laureate Wole Soyinka wrote so bluntly in the Los Angeles Times, “Rwanda is clinically dead as a nation.”

Cycling into Kigali in today however, it’s virtually impossible to imagine that this is the City and Country that suffered so heavily only 17 years ago. Kigali is a modern, clean, developing City; partly modelled on Singapore its high-rise buildings, clean wide streets and shopping malls paint a slightly skewed, but otherwise forward looking picture for Rwanda.

The project that I was lucky enough to visit was the Kinamba Community Project, known locally in Rwanda as the Meg Foundation. Meg, the founder and principle is a little embarrassed by the local name – she wanted it called the Kinamba Project, but the bureaucratic powers that be in Rwanda insisted that it be named after the founder.

For the purposes of avoiding confusion, I will refer only to the Kinamba Project in this blog.

With a view of the Kigali Skyline and Rwanda’s endless mountains rolling into the distance, the Kinamba Project is a Nursery & Primary School which is currently in care of almost 300 children. 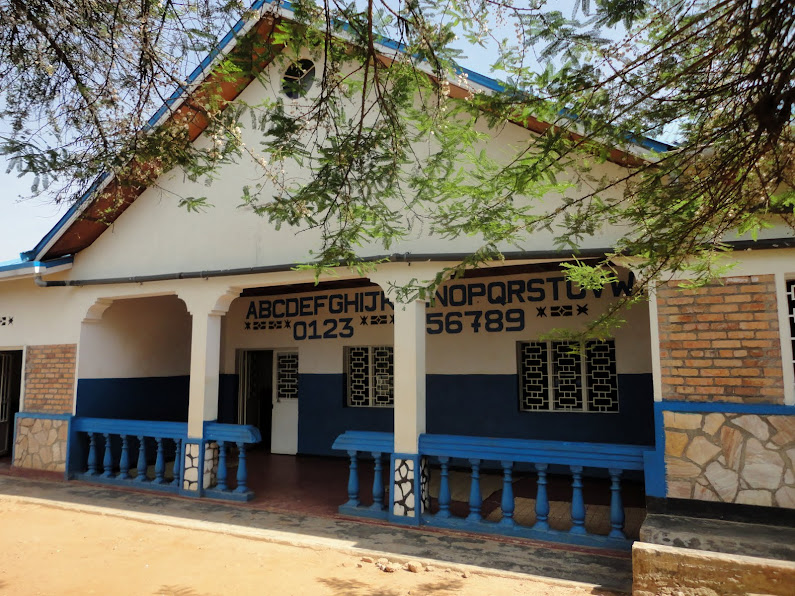 Nursery classes are taught in the morning, with further lessons for local Primary children being held in the afternoon. There is no charge for attending the School, in contrast with other schools in the area. Children from some of the poorest backgrounds are taught at the Kinamba Project, though given the age-spectrum of children who have not yet received education, nursery can account for children anywhere between 3 and 9 years of age.

There’s been many a time when cycling, not just in Rwanda, when children have said “Good Morning Teacher” as I pass-by on the bicycle. That may seem cute, but it’s perhaps a sign for when children are simply taught to repeat, rather than to understand. It’s an often overlooked fact that “number of children in school” is so often at contrast with the more important figure, “number of children receiving quality education”.

Thankfully there are no such concerns at the Kinamba Project. The vibrant teachers pour enthusiasm and engagement with drawings, colour, stories, toys and songs.

There’s also a Women’s Co-operative situated on the site, much like the setup at Life Beads Kenya albeit a currently smaller team and thus production rate.

The dedicated women make the school uniforms, in addition to bags and crafts which are sold locally and abroad (mainly in the UK/US) to help pay for the School Feeding programme. 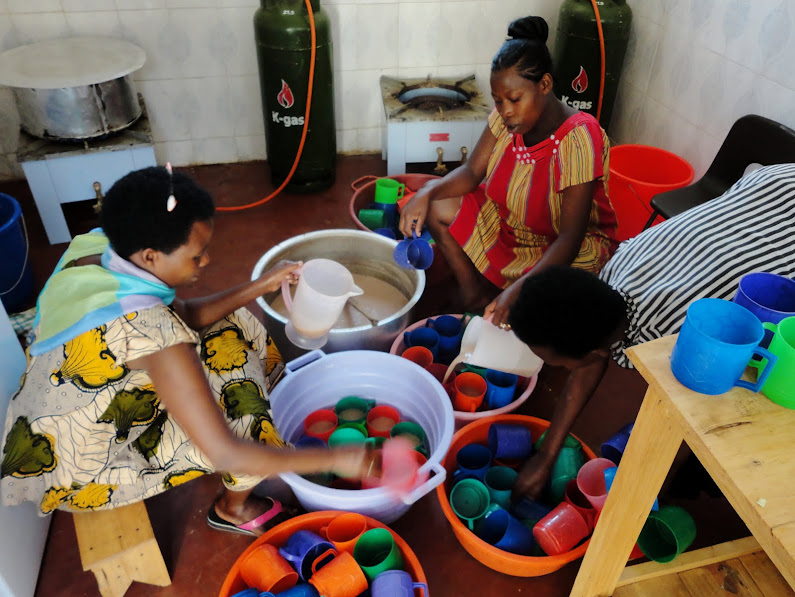 All children are fed at School. Unfortunately because many of the local families are so poor, the meal at School may likely be the only meal these children receive all day. It’s sadly not uncommon for children to arrive on Monday morning without having eaten since Friday afternoon.

How could we help?

Having arrived after a wonderful cycle from Uganda, freshly showered I sat down for dinner with Meg before discussing how Better Life cycle could help the Kinamba Project.

It normally only takes a few days to get to know everyone and get a feel for how, if possible we’d be able to help.

As ever, with my IT Background we were able to offer a “quick win” by taking on the Website Hosting for www.kinambaproject.org.uk – saving around £70 per year. Job done.

In a nutshell, JustGiving will take 5% for any donation, including a monthly fee of £15 for the privilege. That’s actually quite a lot of money. 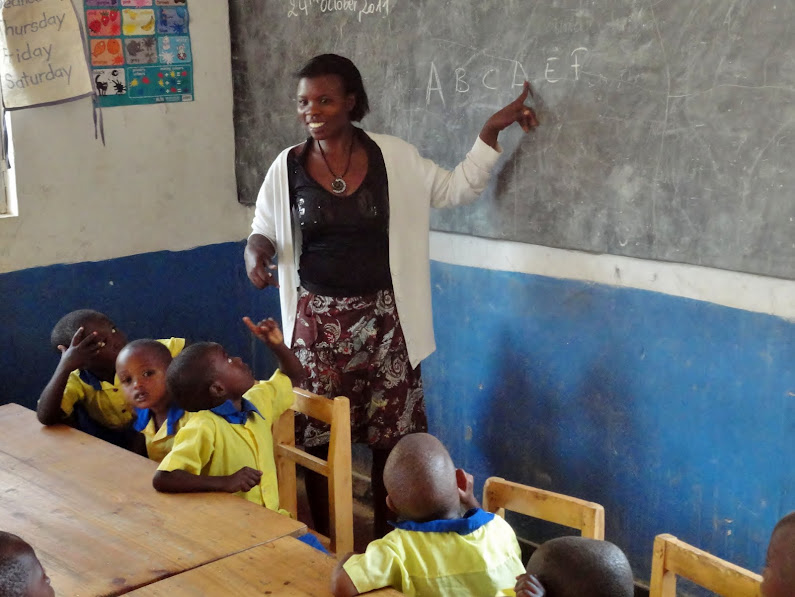 Better Life Cycle and its parent Charity, Good Karma, also use JustGiving, but we’ve recently began migrating everything over to Virgin Money Giving – a not-for-profit company that comes under the Virgin Money banner.

Virgin Money Giving charges a one off setup fee of £120 with only 2% being taken on donations.

Gift Aid is a fantastic benefit offered by the UK Government for donations made by UK Tax Payers. It effectively returns the tax on donations – so if you pay £10, the charity actually receives £12.50. It’s importantly to note that Virgin Money Giving only charge their 2% on the donation, not the donation + gift aid, unlike JustGiving.

So sat in my newly acquainted comfortable bedroom in Kigali, I set to work in setting up Virgin Money Giving for the Kinamba Project , with Better Life Cycle paying the one off £120 setup fee.

The setup process for Virgin Money Giving actually takes a little while, but upon leaving we had done all we could – so it’s just a matter of time to allow the paper work to feed through and everything is setup. Great!

A day at the Kinamba Project

You know me; I don’t have the most enthusiasm in the early dawn hours. Often burning the midnight oil, many years ago my personal constitution negotiated the preference of late mornings.

But at the Kinamba Project, the excited patter of children will wake you without fail as after 7am, the excited children run around the grounds, eager to start their day at School.

There’s a playground within the grounds and the kids often take great pleasure circling the grounds before they congregate at 8AM to proudly sing the national anthem, Rwanda Nziza (Beautiful Rwanda) before School starts.

Meg greets the kids and the day begins. With the aroma of fresh Rwandan coffee wafting down the corridors, I was also up to get on with the day – well most days that is.

The Women’s Co-operative is a vital money earner for the project, with the potential for this operation to increase markedly in the years to come. With my experience from Life Beads Kenya, I was keen to help in this regard – particularly as revenues from the sale of craft contribute to the feeding programme. 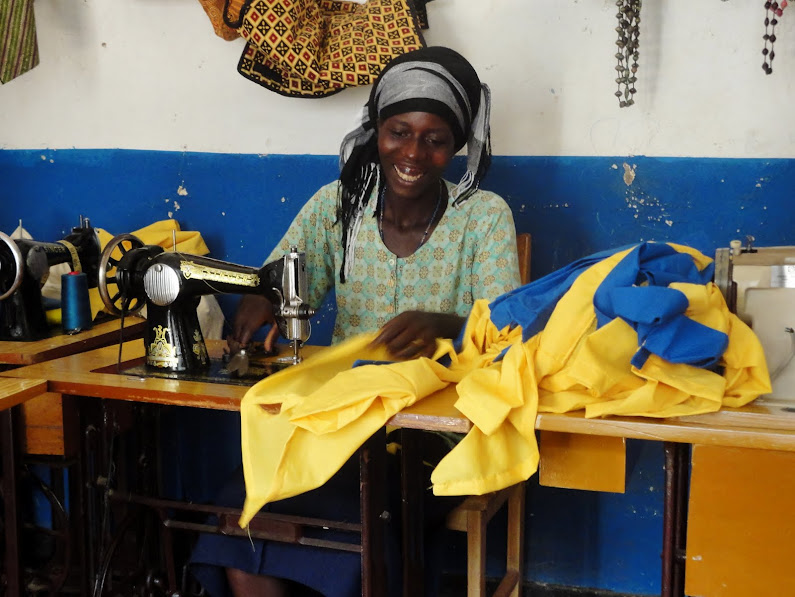 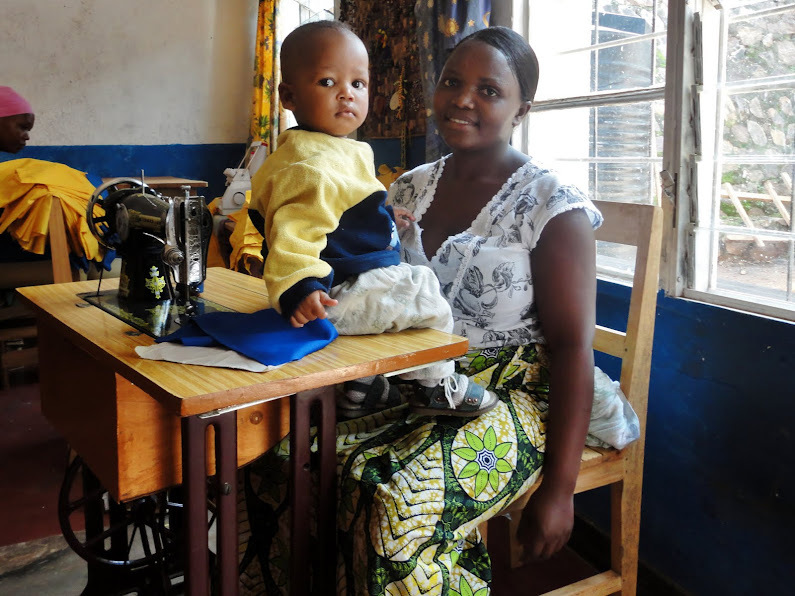 Kimironko market, about 20 minutes on a Moto (Motorbike) is home to a wealth of very colourful African material. Perfect for making & lining bags, with Better Life Cycle funding Meg and I went on a rampage and snapped up our favoured designs. We also bought plainer lining materials, zips and other essentials needed to keep the co-operative in full swing. 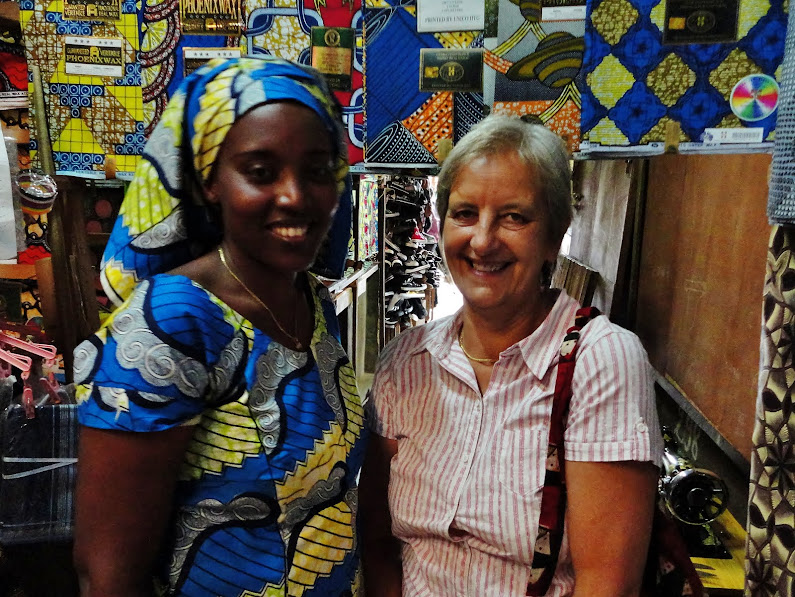 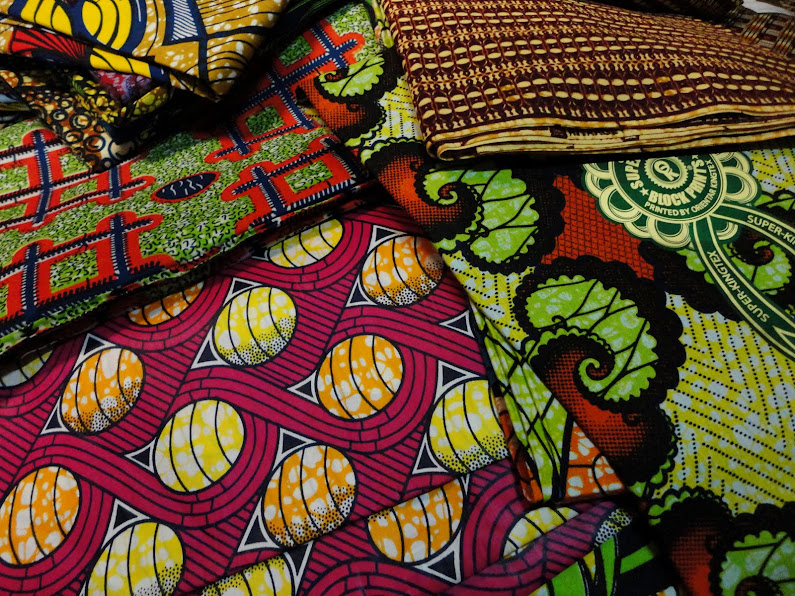 Longer term I’d perhaps like to help with the sale of their goods to the wider market, particularly given the setup developed for Life Beads Kenya – but that’s not something I was able to do in my time there, so a project for the future.

At other projects I’ve assisted in setting up computer networks & websites. However, for the Kinamba Project an item of less sophistication was required; slates! Well, not actually made of slate but these small chalking boards are ideal for the kids to practise their handwriting and drawing. Paper is a declining and expensive commodity, so easy wipe clean slates are a great alternative. We used funds to purchase 64 slates for the kids, in addition to textbooks and short stories from a company called “Little Hands”. These come in both English & Kinyarwanda (the traditional language of Rwanda) so they’re an excellent and fun resource for the enthusiastic and ever smiling kids.

With my inspired time at the Kinamba Project drawing to a close, I weighed up another way I felt Better Life Cycle funds could be put to good use.

The project offers a Sponsorship program, which for £15 per month supports a child from an under-privileged background to receive education at the Kinamba Project. When the time is right, the money is then used to sponsor them to attend the local primary school (with top-up lessons offered in the afternoon at the Kinamba Project). 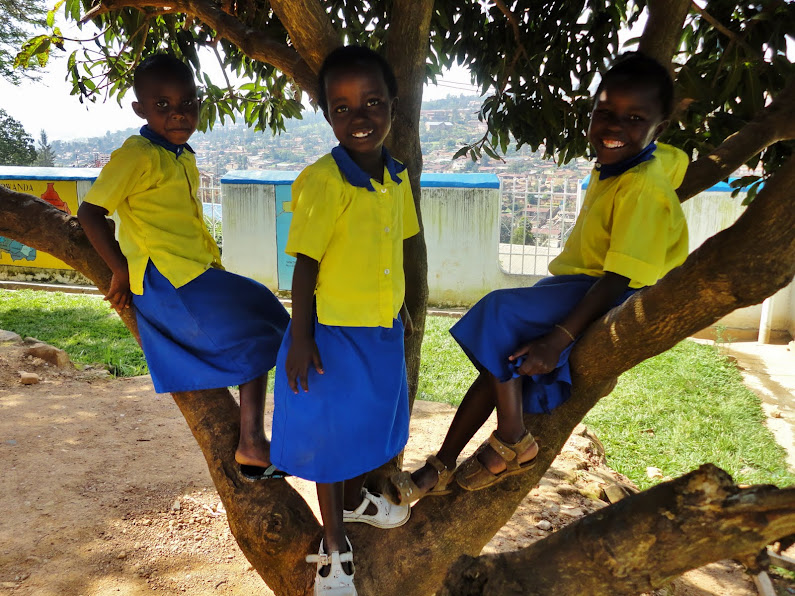 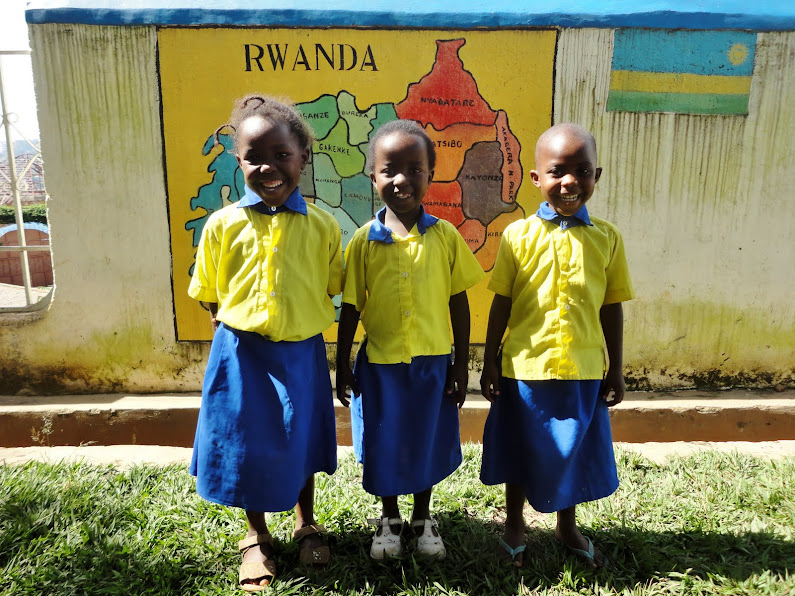 The sponsorship not only pays the school fees, but for all their school materials, uniform, food and any required extras. Having already met some of the children for whom this programme could benefit, Better Life Cycle has agreed to take on the Sponsorship of 3 children.

Child Sponsorship is not actually something we tend to do given its annual requirement (we’re working with relatively limited funds). But here it’s such an excellent way to help the most underprivileged, it made perfect sense to assist. We’ll renew the payments each year and in the future it may be something I take on personally should our Charity funds run out.

So with many photos already snapped of the project, I was kindly invited to the Wedding of Francoise, a key member of the team and person in charge of feeding the kids each day. 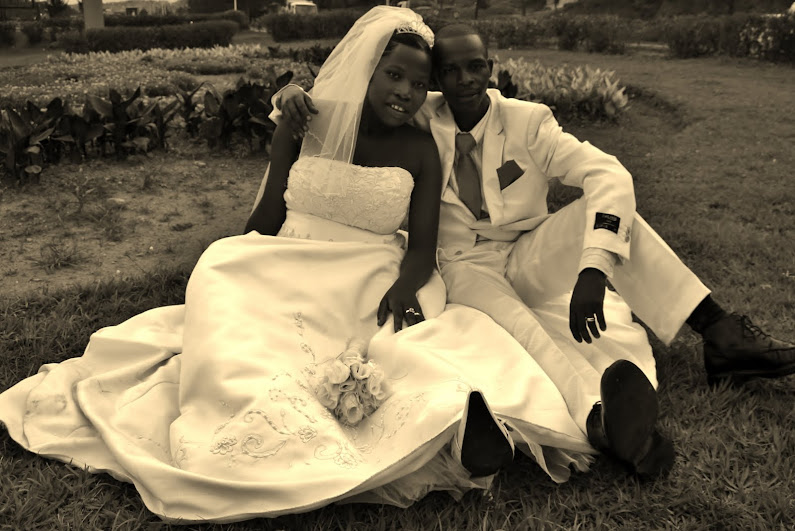 She was getting “married in the morning”; so on the Saturday before I left we attended the day-long wedding which, in typical African Style started no less than three hours late. But we all had a wonderful time and it was great to experience the local culture in this way. Meg is regarded as her Mother by Francoise, so it was a privilege to be invited to this family affair.

Back on the road

So after a few Pizzas at Sol e Luna with Meg and Maxine Silsby (who had put me in contact with the Kinamba Project), my bike was strapped up and it was time to hit the road again.

I really enjoyed my time in Kigali; I was lucky enough to get time so visit the sites, local markets and take in a bit of the City in the short time I was there.

But my visit to the Kigali Genocide Memorial Centre is one which I can only encourage others to see. It’s very well laid out, documented and includes not only a wealth of information on the Rwandan Genocide, but puts it into perspective with the other Genocides that have, sadly, been committed around the world. The message is clearly to ensure that those “100 days or Madness” are never forgotten, that the sheer capable brutality of mankind is never underestimated and for the “warning signs” to be learned and intercepted. 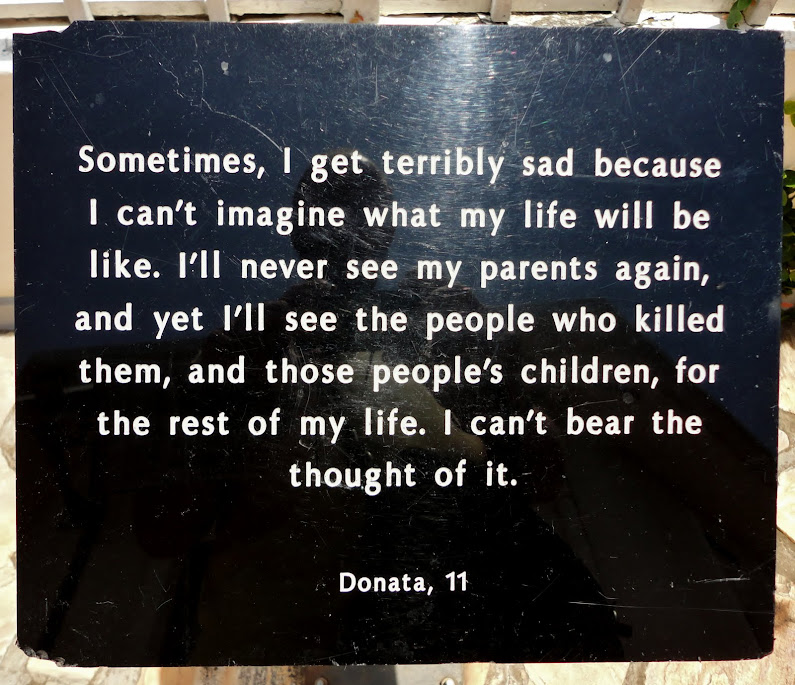 At the end of the Kigali Genocide Memorial Centre is a very moving section dedicated to the Children of the Genocide. Huge photographs adorn the walls with intimate details of the children. Their name, their favourite food, their favourite sport… the manner in which they were killed.

Sadly the lives of those Children were ended before life really began. They will never know what was ahead of them, and many who lived through the Genocide have, of course, been traumatised by the events.

But for the children who are lucky enough to attend the Kinamba Project, it’s amazing to see their beaming smiles and excitement at being offered childhood freedom and education; something those who went before them were so brutally denied.

Huge thanks to Meg and all at the Kinamba Project; we can only but wish them the very best of luck.