Nothing left but Sea…

There are certain days that remain etched in my memory, so strongly engrained it’s as if they’re physical prints. What happened yesterday has, without question, added more wonderful prints to that archive.

After almost 18,000km, 2 years and 2 months, I eventually rolled into the Cape of Good Hope, Africa’s most South Westerly tip. It was a moment that not only signalled the end of my ride, but reunited me back with my family – all of whom I had not seen since leaving the UK on May 1st, 2010.

After waking up early in Somerset West, I had just 80km of roads to navigate along the coast. Jane Nicklin, daughter of Peter Nicklin whom I had worked with in Naivasha alongside Minalyn at Life Beads Kenya, kindly hosted me for the night.

After my now typical morning bowl of porridge & dried fruit, I wove my way along Baden Powell Drive passed the Suburbs & Townships of Cape Town, the biggest of which being Khayelitsha, a sprawling home to almost half a million people. 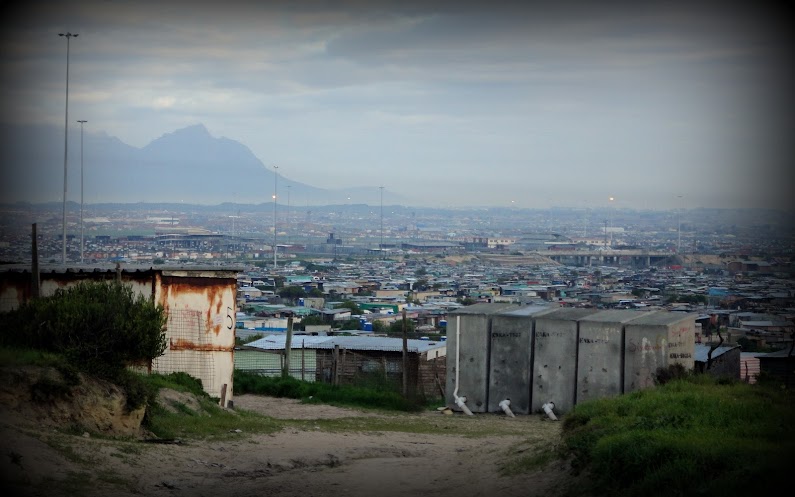 The weather was promising; clear visibility with very little wind – in fact what wind there was would soon turn to a boosting tailwind, so I was thankful to be in favourable hands of Mother Nature – much in contrast the previous week. 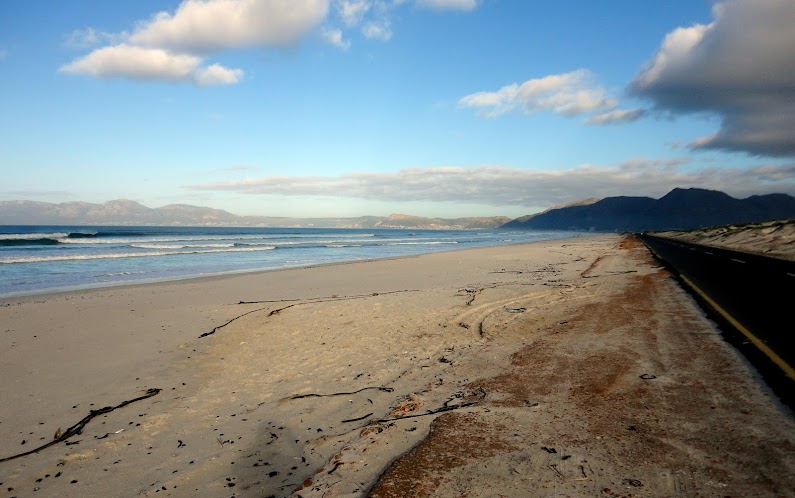 Soon I met the shoreline passing Muizenberg, Fish Hoek, Simon’s Town and hundreds of other South African Cyclists, energetically taking to the beautiful roads on their pristinely clean bikes sporting the latest trends in cycling accessories and Lycra. Working my bearded, somewhat dishevelled morning look, I too was part of this trendy community, but only just. 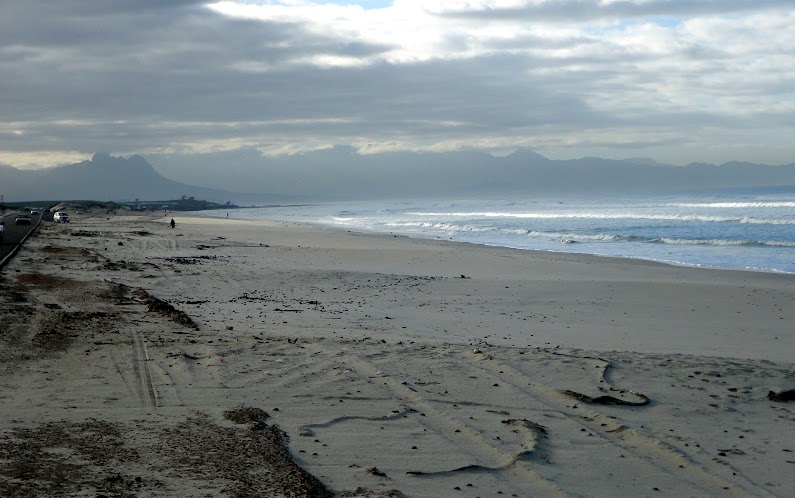 After 65kms I found myself just outside the Cape of Good Hope National Park, where I parted with 85 Rand and began the cycle of the last 15km towards the Atlantic Ocean.

I phoned my Dad in advance to let him know my location; the plan was to have my family overtake me before carrying on to the very end, the Cape of Good Hope, where we’d all meet.

I knew they were very close, but it seemed to take an almost endless number of cars to pass. But soon they did. Their van, carefully driven by Mark, my sisters partner whom I was delighted could join us, was dressed in Union Flags, horn ablaze and all to the sound of wonderful cheers. I got the first glimpse of them all and I beamed with smiles… even if my family were all hanging out the van with cameras like a team from the National Geographic Channel. 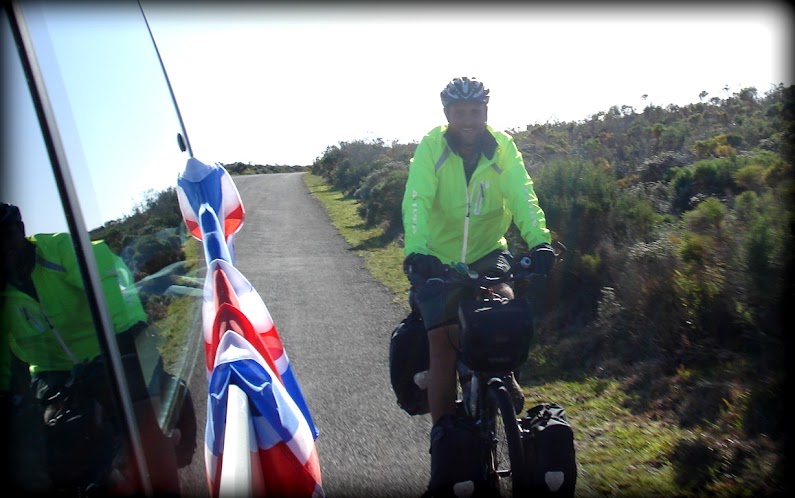 In sheer excitement I pushed up the gears to get there as fast as possible, so fast in fact I missed the turn off and instead found myself cycling a few kilometres uphill towards Cape Point, the lighthouse. Doh! Wrong way. My family looked on no doubt wondering what part of Africa I was headed for next. 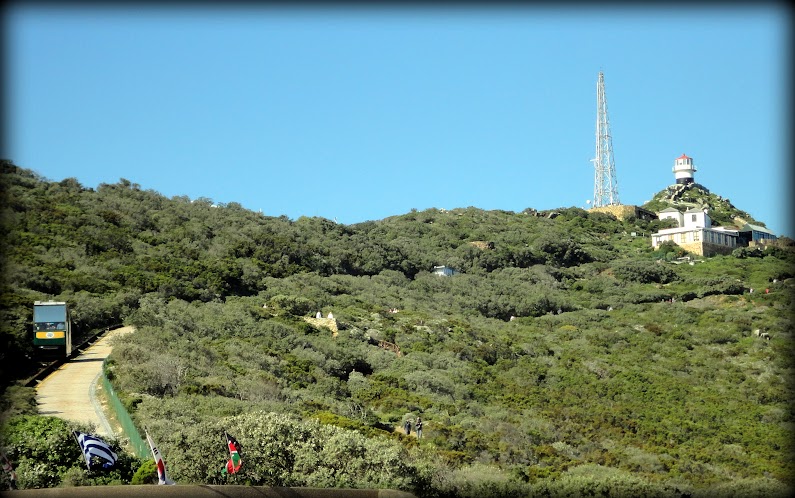 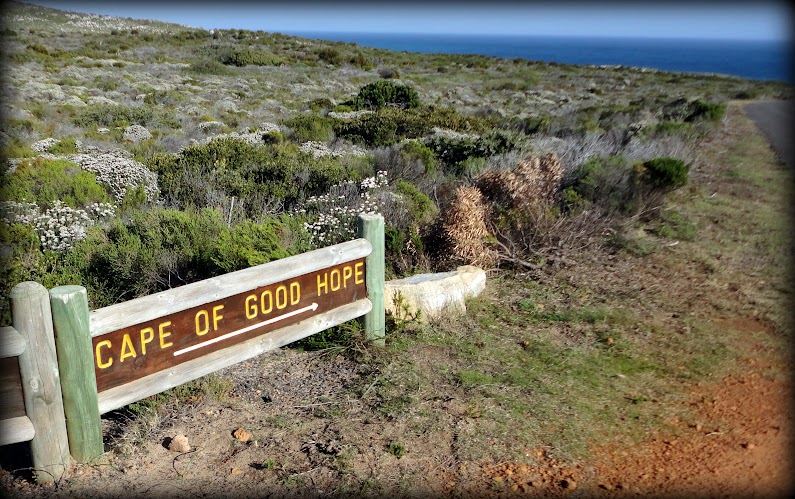 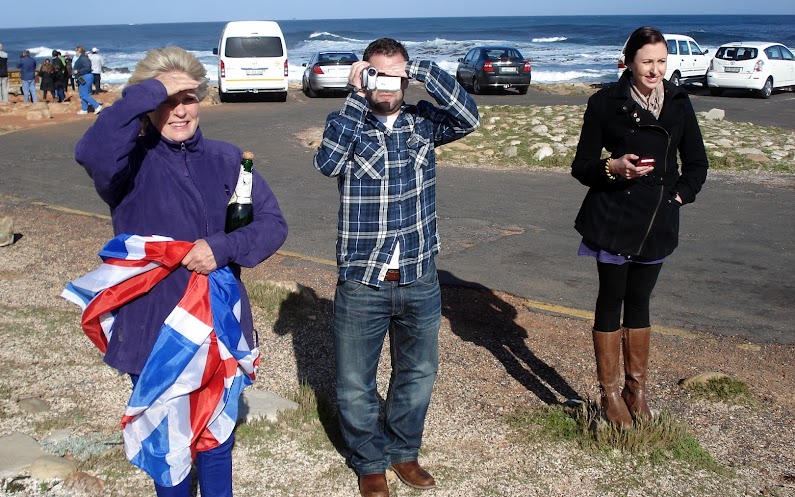 But no matter; I only had to roll back downhill to where, at the very bottom, for the first time in over two years I was able to hug them all – a memory and moment that felt surreal, and still does as I write this post a day later. 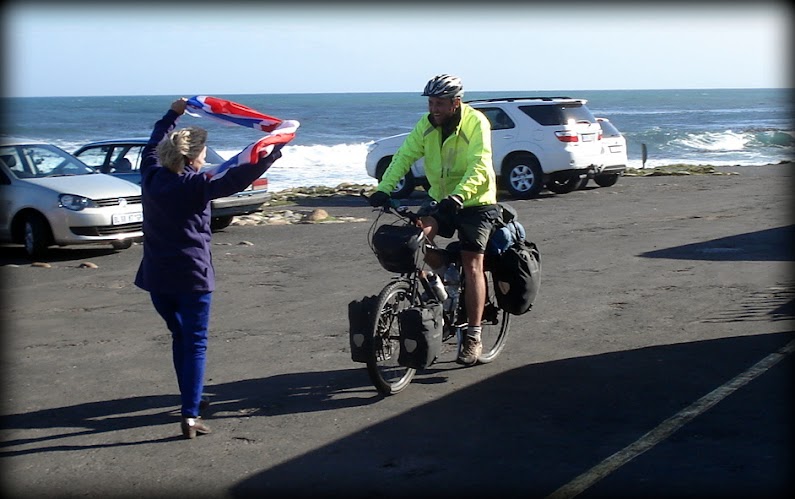 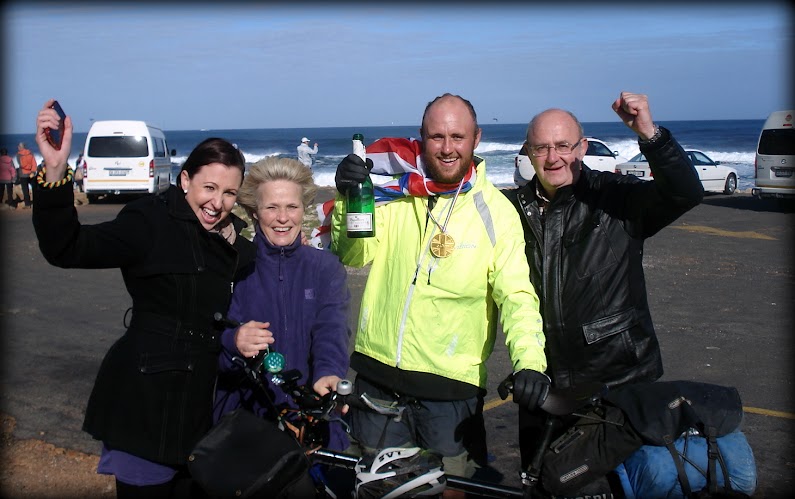 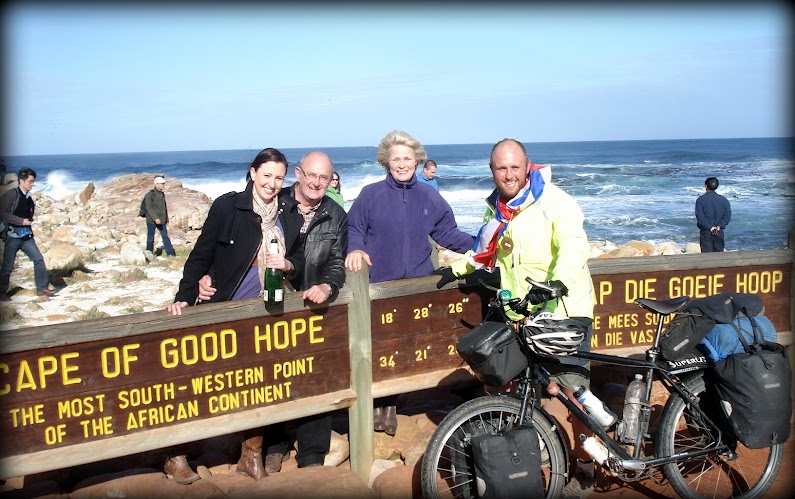 It was a moment I had been dreaming of for over two years; not that I was wishing away the time, but I always looked forward to it, knowing one day I’d be at that spot to celebrate the peak of an adventure. 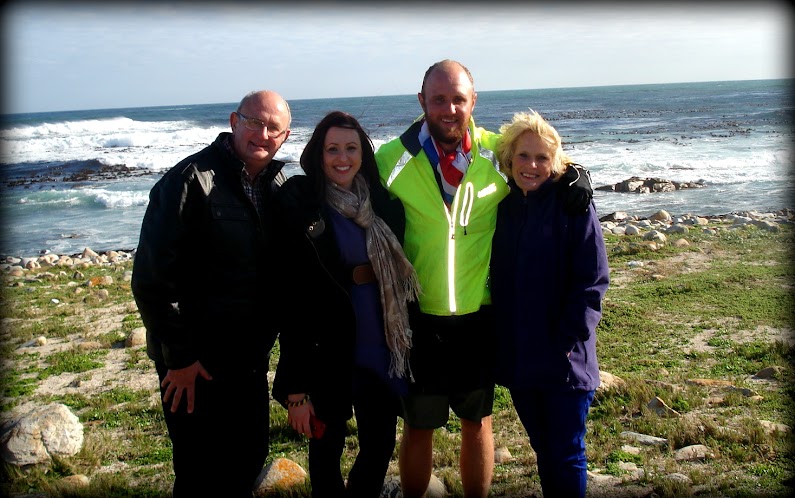 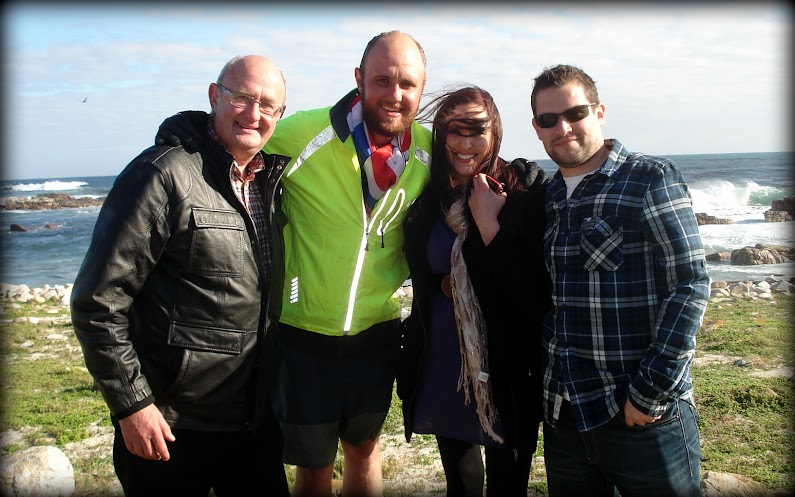 To my delight the whole day panned out just as I’d hoped & imagined. To improve matters further, my parents had bought a few bottles of bubbly which we popped – wow, they tasted ever so wonderful, primarily because the people I’d been missing over the last two years were there, drinking them with me. I couldn’t be happier.

I’m so grateful to all those who’ve messaged me these last few days & weeks, whether via text, on Facebook, Twitter or email. They’ve all combined to make the day one I will never forget. 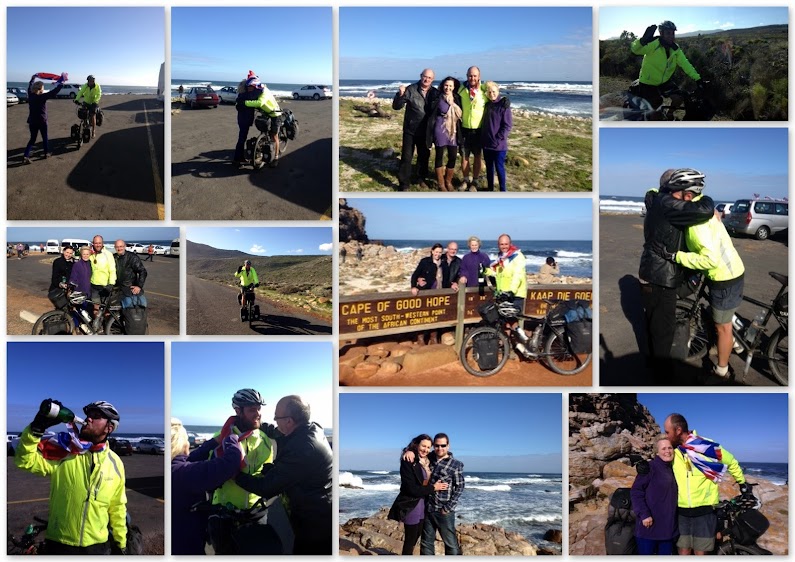 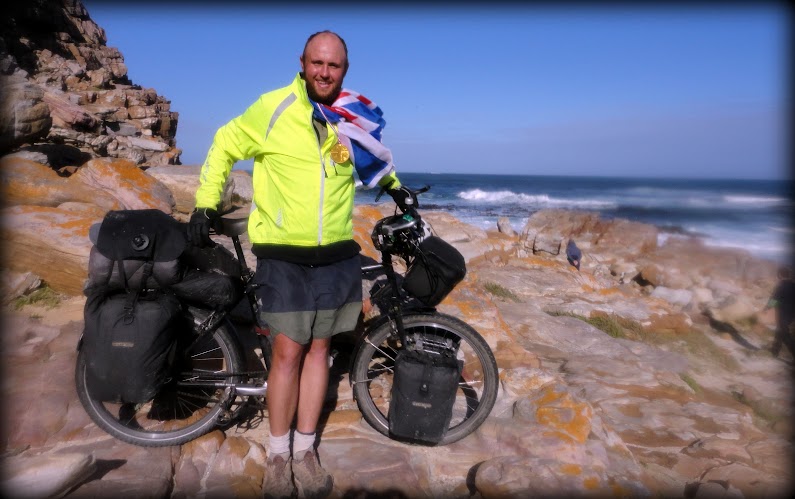 I still have more blog posts to write and to tell the tales of my cycle through Malawi and beyond, but this post needed to be written today, as a small thank you to all who have supported me reach the very end of Africa.

I might just give that beard a trim now…