The Western Portal: Kampala to Kigali

After gratefully topping up with the usual niceties of African Cycling (Anti-Malarial and de-worming tablets) thanks to Marsali Campbell, the Nurse at Dwelling Places, I headed back to my room to get into shape for taking to the Ugandan roads once again.

It’s never quite that quick though; first an all-night Web “session” ensued with Dan in order to earn a spot of pocket money through the development of a consultancy website for Michelle Ovens, a hugely supportive friend from back home in London.

Big Be’nn lodge in the Kampala suburb of Natete (just down from Ivys Hotel) had been great value for me at 20,000 Ugandan Shillings (£4.50) per night. With a warm shower and my very own desk to tap away at into the early hours, I felt like I’d found good deal. The very kind lady at reception, Skorvia, even offered to wash my clothes once-a-week; a definite bonus!

So out of Kampala I wheeled and headed West. Slowly but surely I increased in altitude before the heavens opened, and I mean really opened; after 0.1 minutes I was soaked to the bone. Never mind; I had stocked up on biscuits so chomped into those as I peddled thought the Matooke plantations (green banana which is steamed), weaving ever slowly towards the mystically named Fort Portal, my destination much higher up at the foot of the Rwenzori Mountains. 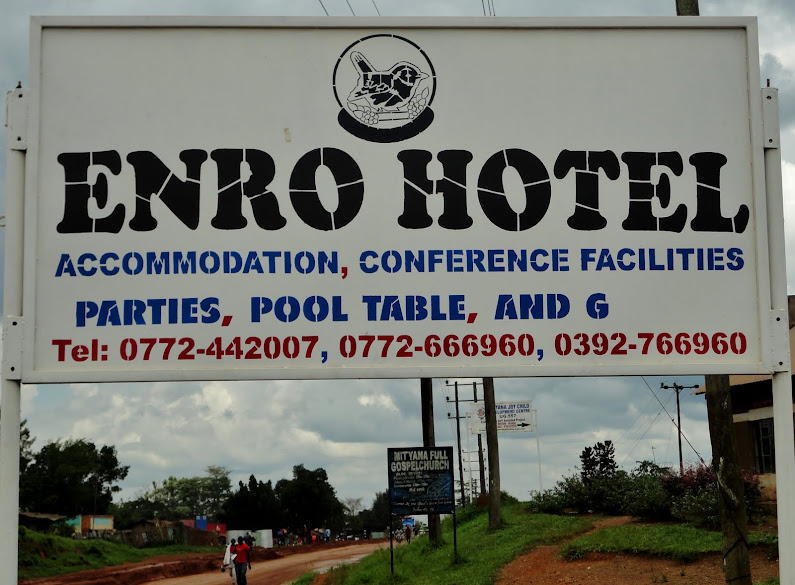 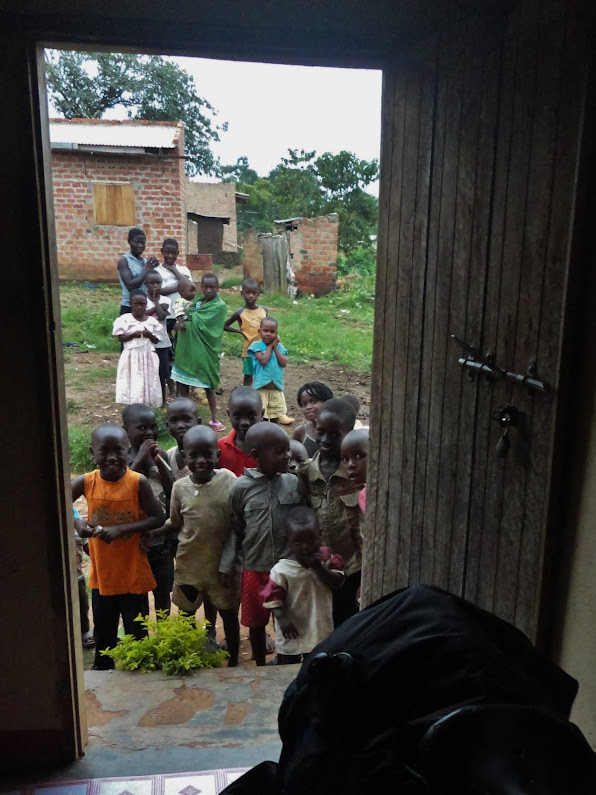 On my first night I made it to Mityana, where I stayed at a hotel that claimed to offer “G”. Any place that offers “G” (my friends often call me “Kenny G”) gets my vote – so I checked in and rested for the night before heading out into the unknown the next day.

The cycle from Kampala to Fort Portal is demanding in places. Well, at least that’s how it felt to me. I guess had I not stopped for 2 months and eaten so much Pizza it would have been easier, but hey that was “Carb Loading” so not to worry. I also discovered a new roadside snack favourite, Rollex, a double-fried egg sandwiched in between two hot, greasy chapattis. Bliss! There’s not much better roadside fuel than that.

Undulations and forest sections continued before line after line of lush Tea plantations. The road continued upwards, but it wasn’t long before the magnificent Rwenzori Mountains stood before me. The skies were full of black clouds so it looked more like I was heading towards Mordor (Lord of the Rings)…but thankfully there was no “Mount Doom” ahead of me.

By the time I arrived in Fort Portal I was soaked, tired and cold so I upped my budget a little and found somewhere that had hot water and a decent bed, which I duly did near the Stanbic Bank.

Spirits were soon lifted after finding a Pizzeria and other restaurants to dabble in some further “Carb loading” and rest for a few days. 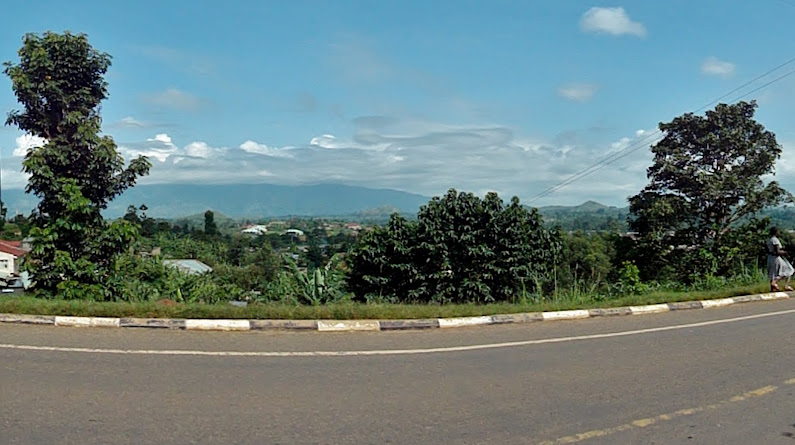 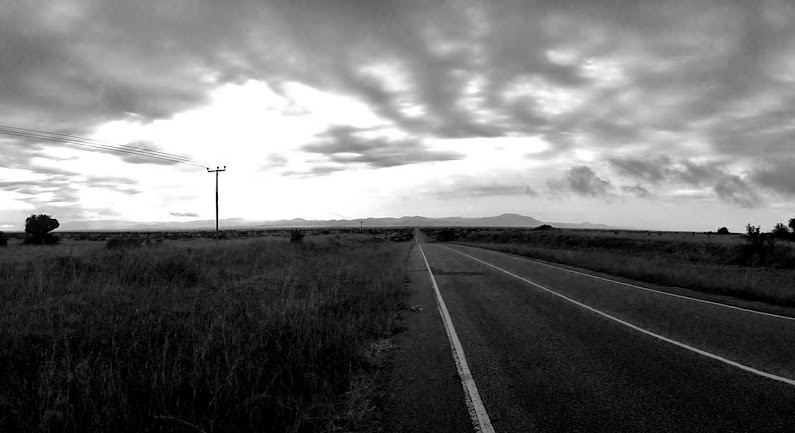 Fort Portal, a city named after Sir Gerald Herbert Portal who eventually became the British Special Commissioner to Uganda, has a much fresher climate when compared to Kampala. With an altitude of 1,500m coupled with higher rainfall, it can actually get quite chilly in the evenings, dare I say cold. But with crystal clear sky-blue mornings sat staring out over a majestic mountain range with hot coffee and Pizza to boot, things really aren’t so bad.

After two days rest I rolled out of the beautifully located Fort Portal and descended towards the stunning Queen Elizabeth National Park and its border with the Democratic Republic of the Congo. I wasn’t heading that way; instead I crossed over the Equator for the last and final time before heading along the road that weaves between the Hippo Lakes of George & Edward.

Queen Elizabeth National Park, named after the current British monarch Queen Elizabeth II, is Uganda’s most popular Game reserve spanning almost 2,000 square kilometres. Its home to Lions, Leopard, Elephant, Hippo, Buffalo…in fact almost 100 mammal species and over 500 species of Birds. Mammal populations are thankfully recovering after they were obliterated by madman Idi Amin and his antics in creating an unnecessary war with Tanzania back in the late 1970s.

After crossing the bridge that separates Lake Edward from Lake George, just in the distance I saw the ever-familiar rear panniers of Cross-Africa cyclists, Barbara & Franz, both of whom are from Germany. 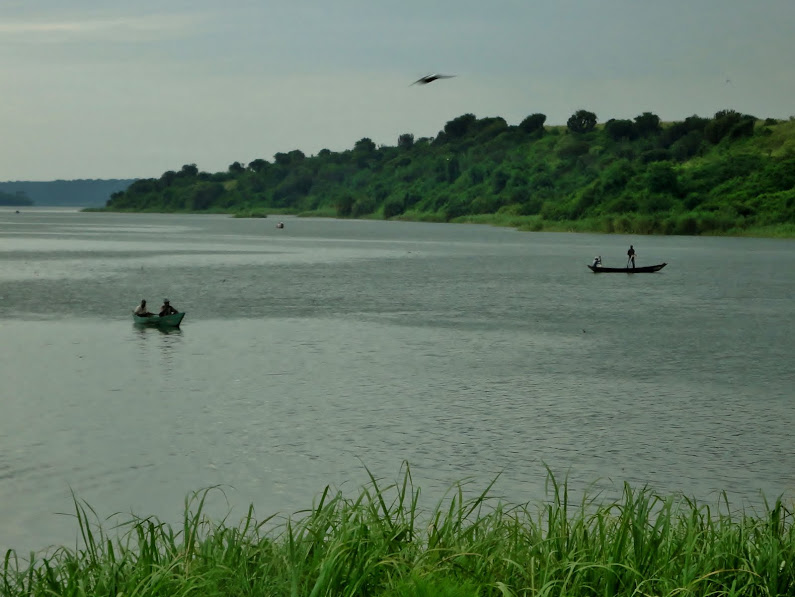 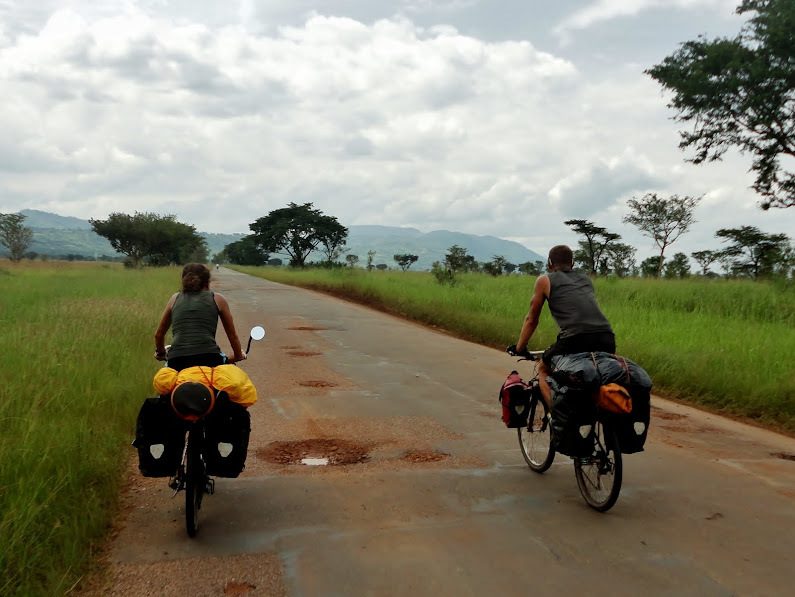 They had been cycling almost nonstop for 6 months since starting in Durban, South Africa. They were navigating their way around Uganda before heading back to Entebbe to get a flight to Ethiopia (getting Visas heading north at time of writing is still very difficult).

With the pair looking supremely fit, I initially wondered how on earth I had caught them up. Then Franz pointed straight ahead. Just off the road were 2/3 Elephants…I stood in amazement before the slightly weird moment when you realise you’re not in a zoo…they’re right there with nothing in between you and them. Wow, exciting!

So long as they can see you and you don’t pose a threat by waving around like a loon, you’re likely to be OK. We slowly peddled past them, looking out for the warning sign of waving ears – they stood peaceful going about their daily chomping and allowed us to snap a few photographs. 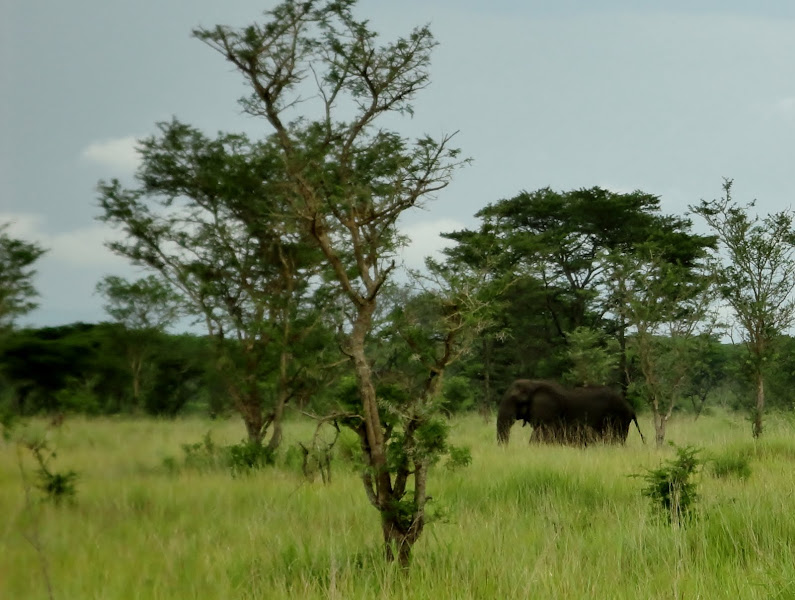 After that we climbed back out of the Park towards Ishaka where we parted the next morning as I headed south towards Kabale, the final city in Uganda before Rwanda. South of Ishaka its dirt track for about 30kms before you join the new(ish) road which takes you to Ntungamo.

After a lengthy uphill followed by a fantastic 10km downhill into Gorilla Country, I arrived into Kabale, my last and final stop in Uganda. I checked into the Home of Edirisa which is a fantastic value lodge that serves great food and even houses a small, well maintained museum and cultural centre. 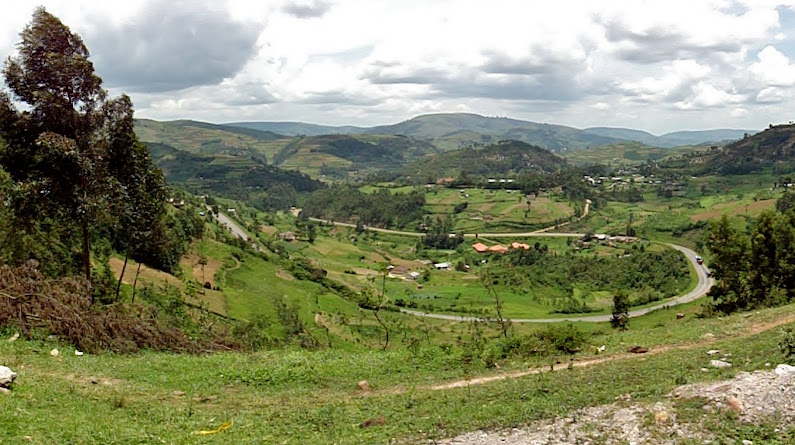 Time to check the Visa…

Early(ish) the next morning I weaved my way along the relatively flat sealed road for about 20km before arriving at the border crossing. Up until this point I hadn’t checked my Visa; I knew I should have 3 months (East African Standard) and that wasn’t quite over with, so I just assumed it was ok. But I didn’t actually check it.

Looking nice and sweaty I handed over my Visa to the clerk. He looked at the stamp before looking directly back at me, after which he took my passport off to show others. Uh Oh. The clerk then said to me that my Visa was only valid for one month and that I should have renewed it in Kampala…Oops; my heart slowly sank.

I calmly argued back that I had applied for a three month Visa, but he informed me that the stamp they put on it was only for a month, it seemed either the entry post had made a mistake, or I had not made it clear that my Visa was to be for 3 months. But I had paid $50, so I was a little unsure what had happened. Perhaps I should have stated that I wanted 3 months, as otherwise you just get 1 month for the same price? Seemed somewhat odd, but this is what I was wracking though in my head.

Then, in typical style when dealing with anyone from Immigration in Africa, he got a call from a friend and started chatting away. He then signalled for me to put my fingerprints on the scanner; was he going to let me off? I perked up and then much to my relief I saw him pick up the stamp and sign me out; phew! 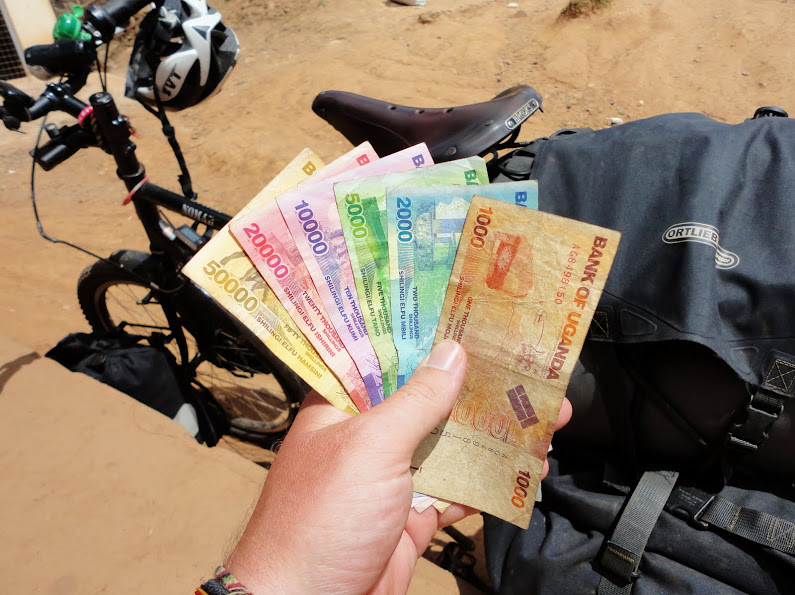 I awarded myself a Coke and changed my remaining money at the border (you can haggle a bit and the rate is pretty good). As ever, there’s no end of touts willing to swap your hard cash for a different currency.

I crossed over and onto the Rwandan Side. A painless process ensued and I was issued with a 3 months Visa for free (free for UK, US, Swedish or German Passport holders, otherwise its $50). If you plan to overstay your 3 month Visa you have to renew it in Kigali. They ask you how long you’d like so I just said 3 months to be on the safe side! I don’t exactly have a great track record with my African visas, in fact I’ve even been to Court but that’s another story.

I happily peddled off, completely oblivious that I was now on the wrong side of the road.

After a few locals keep pointing, I soon realised my mistake and slowly weaved my way towards Byumba, where I stopped for a delicious potato and onion Omelette before realising the time had gone back an hour! With the exception of their being no Sea, going from Uganda to Rwanda is just like crossing the English Channel – you switch sides of the road, all the road signs change from British to French, the clocks change and everyone speaks French instead English.

Actually the latter is slowly changing; in 2009 after a diplomatic row with the French earlier in the decade, Rwanda switched the official language from French, to English. In a dramatic blow to the Francophones, Rwanda also signed up to the Commonwealth of Nations and set about establishing a Cricket Team.

Of course, the reasons behind expelling the French Ambassador, closing of the French Cultural Centre and Radio station are not just the result of a small disagreement. It’s rooted back to the historic colonial past, with a particularly sore issue being the French governments backing of the Hutu regime back in the early 1990s, a significant and antagonistic catalyst towards the Genocide the brought Rwanda to the brink of death in 1994.

So after peddling out of Byumba I was awarded another amazing downhill, after which I seemed to move at great pace. It was a memorable cycle, in fact one of the best of my trip so far. I had been really looking forward to getting to Kigali and I actually thought, because of the mountains, it would take 2 days from Kabale. But here I was, soaring (so it seemed) through the Rwandan Countryside and closing in on the Skyline of its capital, Kigali, as it slowly emerged from the mountains in front of me. 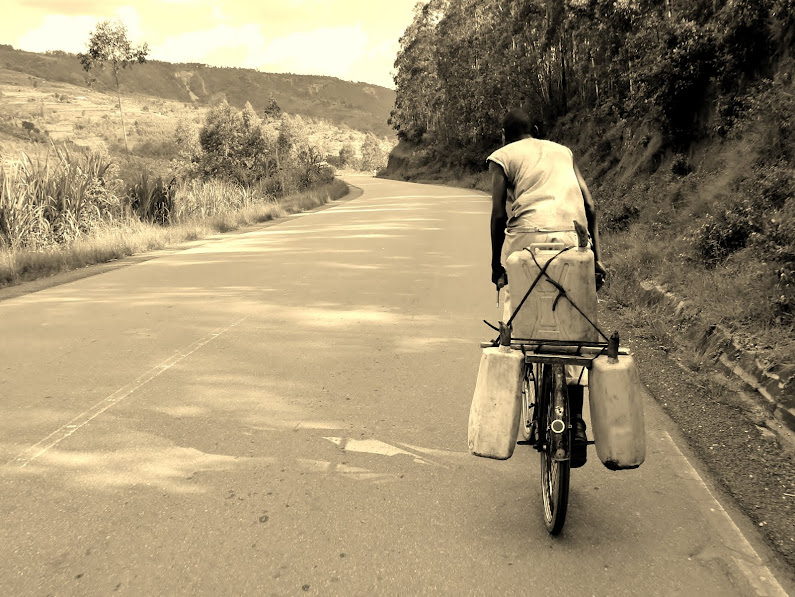 My first taste of Kigali was a set of traffic lights, which low and behold people actually stop at! Not only that, they even had countdown timers on them so you knew when to move off. The Moto Moto’s (formerly Boda Boda’s – Motorbikes) not only had crash helmets for the drivers, but they also carried ones for the passengers.

The road I was on led me in towards the main bus Terminal at Umudugudu, just north of the City. After a quick call to Meg at the Kinamba Project (known locally in Rwanda as the Meg Foundation), I peddled along the Avenue de Poids Lourds before heading up a very steep cobbled road that took me to the Primary/Nursery school which proudly overlooks modern, clean, Kigali.

A few of the primary kids had been sent down to escort me up, so they helped me push the 50/60kg bike up the steep hill towards my sanctuary for the next few weeks.

The Kinamba Project (Meg Foundation) is a Nursery/Primary School project that’s in the care of almost 300 children – Nursery in the morning and Primary in the afternoon. Meg had said I could stay at the school, so I offloaded the bike and soon set to work.

Since leaving from the UK I had been excited about visiting Rwanda…so I was delighted to be here, at long last.

So how would my two weeks in Kigali go? 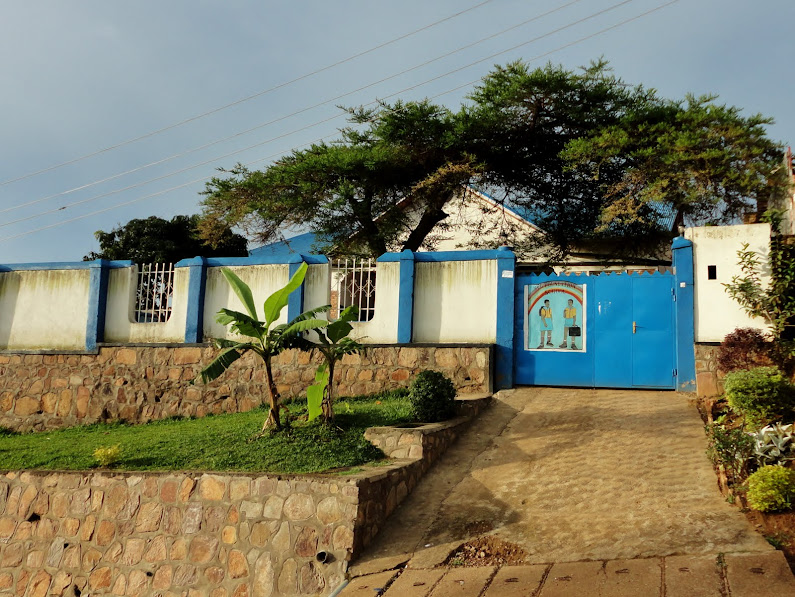